The Cinematic History of Django and Zorro 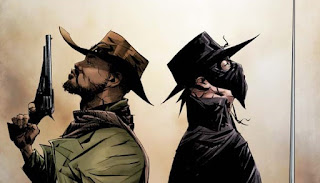 Would you watch a Django and Zorro buddy movie? Of course you would.

With recent news of a Tarantino-led sequel to Django in the works, film fans have been left eager with anticipation. As if sequel news isn’t exciting enough, the new Tarantino movie is also said to feature Zorro as a main character.

Teaming up the two characters will make for an exciting feature. They both have rich pasts, and both have carved out an iconic place for themselves in cinema history. The possibilities of what Tarantino could do with these two are endless. This news warrants a look back at their collective histories in films, and why both were such film icons. While there were many more films involving these two cinema icons, the following are the most notable.

A silent film starring Douglas Fairbanks as Don Diego Vega aka Zorro, this 1920 flick is as innovative as it is fun.

The Mark of Zorro helped define the action-adventure genre for decades to come. Following the story of a wealthy ranchero living a double life as a gallivanting vigilante, this film was a huge success and is lauded as a generation defining achievement to this day.

The portrayal of the Zorro character shares many similarities to Batman and was most likely a huge influence on the creation of Bruce Wayne.

An Italian Spaghetti Western starring Franco Nero, Django is considered one of the best films ever made in the genre. At the time of its release, Django was also known as one of the most violent films ever. This likely drew the attention of Tarrantino, who eventually made his own adaptation.

Depicting a dismissed Union soldier caught up in a race war, this movie helped Django become one of the most iconic heroes in Western films.

A sequel to the beloved Mark of Zorro, Don Q, Son of Zorro was also a big hit. This time playing Zorro’s son, Douglas Fairbanks gave yet another great performance. Following Cesar de Vega taking up his father’s mantle, this adventure is even more exciting than the original.

Rated as one of the top ten movies in 1925 by the New York Times, Don Q has established its place in cinema history.

Set twenty years after Django, Django Strikes Again shows the titular character abandoning his violent past to become a monk. Learning for the first time from a dying former lover that he has a daughter and she’s in trouble, Django is forced to renounce his vows and save her life.

This sequel established many genre tropes that would follow westerns and revenge films for decades to come.

Undoubtedly the best Zorro movie to date, The Mask of Zorro is both a deeply emotional and lighthearted tale. The story involves Don Diego de la Vega passing on the mantle to his new apprentice played by Antonio Banderas.

Filled with exciting action sequences and hilarious comedy, this film brought Zorro to the modern cinema. In many ways, this blockbuster fit the formula of many modern-day superhero movies.

In Tarantino’s adaptation of the character, this will most likely be the film that influences him most.

Hoping to create a Spaghetti Western set in the pre-Civil War south, Tarrantino decided to put his own unique spin on the Django character. Instead of a former Union soldier, this time Django is a freed slave, searching for his lost wife and doling out justice on the racist slave owners of the time.

This film is another Tarrantino great. Most likely Jamie Foxx will return in the recently announced sequel, starring alongside the Zorro character.

With the storied cinematic past of both characters, there are a lot of possible influences for the upcoming crossover. No matter what direction Tarantino goes, in we all know it’s going to be great. It can’t get here soon enough.