During the past 3 and 4 of July there were unfortunate moments for Spanish genre film. And it is that with scarce hours of difference they left us three of their most emblematic names, at different levels. To the mediated death of Arturo Fernández and José Luis Merino, which we already echoed here last Friday, was joined by Eduardo Fajardo, who died at 94 years of age on Thursday morning in Mexico, where he lived on horseback with Almería. With him one of the most prolific actors of our scene is gone, as they testify a bulky curriculum formed by more than one hundred and eighty films, seventy-five plays and more than two thousand television interventions. He was also, in addition, president of the actors union.

Eduardo Fajardo was born on August 14, 1924 in the Pontevedra town of Meis. However, when he barely has eight days to live his family moves to La Rioja, where Eduardo will spend his youth, first in Gimileo and then in Haro. After the death of his father, his mother founded a dairy factory in Santander, where the future actor attends the Baccalaureate. And it is in the Cantabrian capital where he contracted the poison of interpretation, so he decided to go to Madrid with only eighteen years to make his dreams come true. His first steps in the profession are as a dubbing actor, activity that combines with his studies for the law degree that, although it ends in 1945, never gets to practice. Little by little he is making a hole in the profession and, thus, his work as a doubler joins his entry into stage tables as an actor in the company of María Fernanda Ladrón de Guevara. By the way, as a curiosity, Fajardo said that he was given the compulsory professional card to work as an actor in the theater had to lie and put that was older, because at that time was not the minimum age necessary. 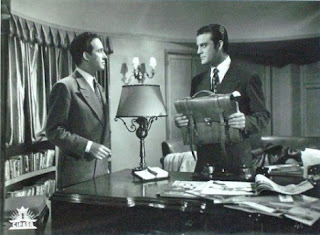 Without abandoning these two tasks, his entry into the world of cinema takes place in 1946 in the film Dulcinea , although his first important role does not come until a year later with Heroes of 95 , a film based on the figure of Eloy Gonzalo. Shortly after, the then all-powerful CIFESA hires him exclusively for an initial period of one year that would end up extending to four. In this time, Eduardo intervenes incorporating secondary roles in some of the greatest successes of Spanish cinema at the end of the post-war period, in the case of Don Quixote de la Mancha (1947), Locura de amor (1948), Alba de América (1951) or La lion of Castilla(1951), without forgetting his participation outside the shelter of the popular company in Balarrasa (1951). For his little outside, at this time he also founds his own theater company, which he would keep for two years, and continues as a dubbing actor. And it is, precisely, exercising this last facet when an event that would change your life occurs. He remembered it this way: " When I was in Chamartín Studios dubbing the movie Othello , someone asked about that young man who was dubbing the voice of Orson Welles. They told him that he was a certain Fajardo, who had been in the movies for a few years. This gentleman wanted to meet me and invited me to dinner. At that dinner he offered me a contract to go to Mexico. We were talking for several months and finally decided to go there ". 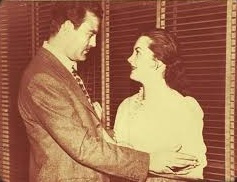 Eduardo Fajardo arrives in Mexico in 1953 with the intention of filming a film about Hernán Cortes that finally does not materialize in anticipation of the possible problems that could arise between the different Spanish and Mexican lenses on the character. In spite of what could be predicted this bad beginning, the certain thing is that the Spanish actor does not take in taking a gap in the industry of the Aztec country, debuting with Tehuantepec(1954), which coincides with Katy Jurado. It is not the only great star of the golden age of Mexican cinema with which it coincides during those years. He also does it with María Félix, Arturo de Córdova or singer Pedro Infante, who was the godfather of one of his children. Not only that, but within his personal facet he married the popular actress Carmelita González, with whom he had two children and from which he later separated. As for his professional career in the United States, which also includes theater, radio drama and television, his participation in two major classics of Mexican fantastic cinema stands out: La llorona (1960) and, above all, the exceptional Macario (1960) ). 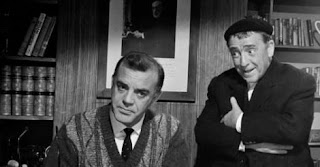 After being widowed by his second wife, Eduardo decides to return to Spain. We are in the middle of the sixties, a time in which our cinema is going through one of its most fertile times in terms of the realization of number of films, encouraged by the fever of co-productions with third countries ascribed to the politics of genders. Although the actor frequents all kinds of styles, from comedies - The city is not for me (1966), Four night of weddings (1969) -, even horror movies - The devil takes the dead / Lisa and il diabolo (1970) , The mansion of the fog / Quando Marta urlò dalla tomba (1972), The cross of the devil(1975) -, passing through science fiction films - Transplantation of a brain / Crystalbrain, l'uomo dal cervello di cristallo (1970), Spectrum (Beyond the end of the world) (1978) -, of eurospies - 3S3, agent special / Agent 3S3, massacre al sole (1966), 087, mission Apocalypse / Missione apocalisse (1966) -, of supercriminals - Assault on the crown of England ( Come rubare the crown d'Inghilterra , 1967) -, war - The long Day of the Eagle / The Battaglia d'Inghilterra (1969) -, giallos - A suitcase for a corpse /Il tuo dolce corpo da uccidere (1970), Coartada en disco rojo / I due volti della paura (1972), L'assassino è costretto ad uccidere ancora (1975) -, and even gangsters - Times of Chicago / Tempo di Charleston - Chicago 1929 (1969), ¡Viva América! / La vera storia di Frank Mannata (1969), Homicide in Chicago(1969) -, if there is a genre in which Eduardo Fajardo would specialize, this is undoubtedly that of the then populous eurowestern. So much so that between 1965 and 1973 participates in almost thirty films belonging to the style, where he performs as a rule villain roles. Not to repeat itself, the actor commented that to give shape to this type of papers he was inspired every time in the psychology of a different animal. 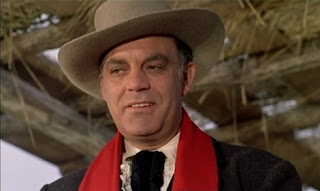 Of the different spaghetti-westerns in which it intervenes, it highlights in its own right one of the capital titles of the subgenre, the master Django (1966), where he would give life to one of his most memorable roles, that of the racist Major Jackson. A film of which, incidentally, Eduardo Fajardo kept a curious anecdote, which was about to end in disgrace: " The director Sergio Corbucci put the camera in front of me and said: now at this moment the bandit comes and goes to kill, you just have to move your eyes. I will go shooting so that first you look to your right. He got into a situation, did not notice and shot hit me all the flash in the eyes. I was unable to see for fifteen days, and believing that I would never see again " [2]. Despite this incident, the collaboration between the actor and the filmmaker would continue over the years, which made it possible for Fajardo to be part of the cast of other such outstanding titles of spaghetti-western as Salario para matar / Il mercenario (1968) , Companions / Let's kill, comrades (1970) or What do we care about the revolution! / Che c'entriamo noi with the rivoluzione? (1972). Another film to highlight in his wanderings by the western Mediterranean is The Bandit Malpelo / Il lungo giorno della violenza (1971), to contain one of the few leading roles for the big screen of his career. 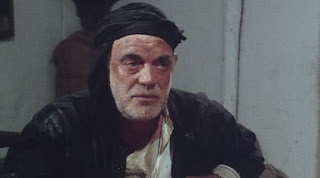 Far from resenting, the end of the golden age of European genre cinema in the early eighties did not affect the feverish pace of work that Eduardo Fajardo had been developing since the mid-sixties. Something to which contributed its participation in several series produced by Spanish Television that even today enjoy a great popularity, case of Curro Jiménez (1976-1977), the barrack (1979), the joys and the shades (1982) , Sadness of love (1986) or shift of office (1986). Of them, he kept a special fondness for his role as Uncle Barret in La barraca, to the point that he even baptized one of his houses with the name of the novel by Vicente Blasco Ibáñez. Along with his appearances in the cathodic medium, the actor returns to his work as a doubler, showing himself especially active in the dubbing that occurs massively with the emergence of the video, and without leaving aside his work for the big screen. Fruit of this is its appearance in titles such as Magic Powders (1979), The invasion of the atomic zombies / Incubo sulla città contaminata (1980), Hundra (1983), The exterminator of the road / Il giustiziere della strada (1983), Biting Life (1986) or Brother of Space /Fratello dello spazio (1988), a late response to ET, the extraterrestrial ( ET The Extraterrestrial , 1982) in a Christian key, in which Fajardo would appear accredited with the pseudonym Edward Hamilton and that ultimately would become his last role for the big screen. 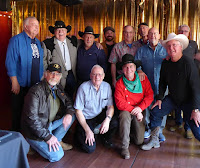 [Eduardo Fajardo-tribute
In recent years the actor had lost mobility in his legs, so he had to move in a wheelchair. In the image, in one of his last public appearances, during the tribute that gave him at the end of December of last year the Almeria Western Museum of Cinema]

Retired in Almeria, where he was his last wife, Fajardo dedicated his last years of life to an inclusive scenic project for disabled people called "Theater without barriers" that he developed in the Andalusian province since 2002. Meanwhile, he also had time to receive numerous tributes for his career, among which are the Order of Merit with which he decorated Juan Carlos I, the plaque and medal Ignacio de Monfort that was delivered to the Presidential Palace by the Mexican government or the first star of the walk of the Fame of Almeria, among many others. However, the most important recognitions for him were the five streets that bear his name, distributed in Almeria, Roquetas de Mar, Mojacar, Malaga and Gimileo. And it is that, in the end, "the villain was not so villain",