Alberto Gadea: "I no longer have the physical abilities, but now I feel more like an actor" 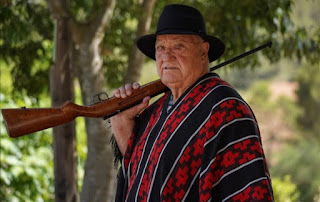 Alberto Gadea, worked as a stuntman and actor in westerns.

He was a film stuntman, appeared with stars like John Wayne and Charles Bronson and ended up confused with a mafia boss.

To say that Alberto Gadea (Barcelona, ​​1933) has had a life in film, as well as being unoriginal, falls short. Fiction and reality are mixed in the biography of this aspiring actor and adventurer of the underworld who shot more than 60 films as an extra, stuntmn and actor, many of them in the 'spaghetti-western' genre.

In the 60s, you worked in the cinema in Barcelona.

I often went to Paral.lel, where Ignacio Iquino's studios were, to see if any films were coming out. One day I was at a bar, talking to a kid who had boxed in North Africa, when one of the producers heard me and told me to go up to the studios, that they needed a boxer.

What movie was it?

“Cerca de las estrellas”. I had to double Enrique Avila and he was so proud that I did not take off my makeup in four days. It was the first film I did as a stuntman. I had already played a helper in “Rapsodia de sangre” and my first role as an actor was in “La ruta de los narcóticos”.

“En Sangre sobre Texas” there was real blood. I broke my wrist by jumping from a stagecoach, they operated on me and I kept rolling along with the cast.

You worked with Hollywood stars.

In westerns it is very clear who is the good and who’s the bad, but in real life the line is more diffuse.

There are people who look like one thing and are another. After I was arrested for a robbery I fled Spain and lived in Paris and Rome. A friend who was a bank fraudster proposed to me to join him because, being an actor, I could fool people. But I was arrested and the Italian press called: "Arrested the mafia boss of an American counterfeiting ring". Of that band of 25 I only knew my friend and they could not keep me in prison.

I do not know what is fiction is and what is reality ...

There is no fiction here, this is what I have lived. I also followed up with ETA members in the Basque Country. I have it all written in Memories of a Mercenary, which is the continuation of Operation Boomerang, a fictional book based on the flight of El Lute.

I do not regret it, it has been an adventure. But I feel bad about the cinema. Now I realize that I was wrong. I thought that it was enough to be handsome and be muscular and I did not prepare myself to be an actor.

Lately I have participated in the documentary “Goodbye Ringo” and with the director of photography Paco Marín have made several films.

I have lived it as an acknowledgment towards myself. Now I do not have the physical ability, but I feel more like an actor.
Posted by Tom B. at 7:08 AM