Voices of the Euro-western ~ “Minnesota Clay” 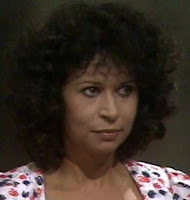 Rita Savagnone was born in Rome, Italy on September 19, 1939 to Giuseppe Savagnone and Rosella Marraffa, She is the younger sister of voice actress Deddi Savagnone and the cousin of composer Claudio Abbado (Savagnone's father and Abbado's mother are siblings). Savagnone began her acting career at some point during the 1950s. She is better known to the Italian public as a voice actress. She is the official Italian voice of Vanessa Redgrave, Edwige Fenech and Joan Collins. Other actresses’ she’s dubbed include Whoopi Goldberg, Shirley MacLaine, Debbie Reynolds, Liza Minnelli, Farrah Fawcett and more. In Savagnone's animated roles, she voiced Shenzi in the Italian version of “The Lion King”.

As an actress, Savagnone appeared in at least seven films and eight television shows. Her latest film appearance “The Move of The Penguin” was directed by her son Claudio Amendola.

Savagnone has been married to voice actor Ferruccio Amendola until 1971. They had three children including actor Claudio Amendola. She was also married with playwright Manlio Santanelli but that marriage also ended in divorce. Through Claudio, she has three grandchildren including voice actress Alessia Amendola.

In 2014 she performed at the cinema with the comedy “La possa del pinguino”, which was the directorial debut of her son Claudio, in which her niece Alessia also played a role.
Posted by Tom B. at 6:59 AM