Voices of the Euro-western ~ The Genius 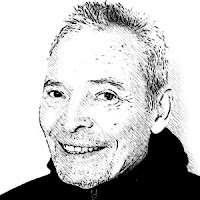 Thomas Danneberg was born in Berlin, Germany on June 2, 1942, is a German actor and voice-actor. He is best known as Charles Emerson in the 1967 Edgar Wallace film “The Blue Hand” and for dubbing over the actors Arnold Schwarzenegger, Terence Hill, Sylvester Stallone, John Cleese, Dan Aykroyd, Adriano Celentano, Nick Nolte, John Travolta, Michael York, Rutger Hauer and Dennis Quaid. He has also collaborated with the German trance/techno-band E Nomine on a number of their albums.

Danneberg appeared in two Edgar Wallace films "The Bane of the Eerie" and "The Blue Hand" and in "Codename Wild Geese". He was discovered in 1965 by Gert-Günther Hoffmann, the longtime "king" of the black industry and later spoke in small roles, which dubbed his "mentor". During his appearances in "Kommando Leopard" and "Der Commander" Danneberg is dubbed by Rainer Brandt; he himself dubbed the lead actor Lewis Collins. He’s also a writer of dialogue books and directs.
Posted by Tom B. at 6:06 AM