Sergio Leone: "Morricone is one of my best writers".

Ennio Morricone and Sergio Leone in May 1984, press conference of "Once upon a time in America", film out of competition - 37th Cannes Film Festival

1989 | In 1989 Noël Simsolo dedicated the last part of his series "Musicians for filmmakers" to the Leone-Morricone couple. One could hear an exceptional and exciting interview in which Sergio Leone spoke about his collaboration with Ennio Morricone, followed by an intervention by Serge Daney.

Hitchcock-Herrmann, Fellini-Nino Rota or Blake Edwards-Mancini ... There have been many lasting and successful associations between filmmakers and composers in film history. In France, of course, there is also the combination of Jacques Demy and Michel Legrand's talents. But the collaboration Sergio Leone-Ennio Morricone did not look like any other. Beyond the human and artistic complicity that united the two men, the working methods of Leone, the conception of the function of the music in the cinema that he imposed, offered in his films a capital and singular role to the compositions of Morricone . To the point of making him say that Ennio Morricone was perhaps his best scriptwriter.

In 1989, Noël Simsolo dedicated the last part of his series Musicians for Filmmakers to the Leone-Morricone couple. One could hear an exceptional and exciting interview in which Sergio Leone spoke about his collaboration with Ennio Morricone, while at the end of the show, Serge Daney and Noël Simsolo said why and how they think the director and the musician had together marked a key moment, ushered in a new era, the history of film and film music.

From the duet he formed with Ennio Morricone, Sergio Leone confided to Noël Simsolo:

It's more than a couple, it's like a kind of involuntary marriage. [...] We have known each other for a long time. I do not like to repeat myself and explain things many times, and with Ennio it's very easy, in one look we understand each other right away. There is the success we have had together, the esteem we have for each other. He is able to rewrite a piece of music four or five times if I do not like it at all. [...] It's more than a composer for me. I do not like words in movies at all, I always hope to make a silent movie, and music substitutes for words, so we can say that Morricone is one of my best writers.

On working with Morricone:

Ennio works in a completely special way with me. I compose the music before making the film. I work with music. It is a complicity, not of history, but of the idea.

Ennio Morricone was the first choice Stanley Kubrick to compose the music of Mechanical Orange . In this connection Leone said:

When Kubrick asked me to take Ennio for 'Mechanical Orange', he gave me a statement that touched me a lot. He said to me: "I have in front of me all the music of Ennio Morricone. Why do I just like all the songs he made with you? "I said," I hate Strauss, so why do I really like Strauss in '2001'? it is linked to a visualization so precise, it is a perfect marriage with the music, I do not care about the quality of the instrumentalization With Ennio it is necessary to work like this If you have the time, the patience to explain to him the movie, to talk a lot with him, he will surely give you fabulous pieces.

Leone had asked Morricone to compose the musical themes of the six main characters of Once Upon a Time in the West. It lacked the most difficult theme, that of the most ambiguous character, that of Cheyenne played by Jason Robards:

We arrive at the day of the recording, with seventy orchestral musicians, and Morricone begins to set up this piece. And he sees behind the window my face that was not happy at all. He said to me, "It does not work." I say, "No, no. It's true that you added the instrumentation, but that's not what I wanted. "He said," I do not know what to do, I composed six themes that I thought I had arranged Perfectly. Tell me, tell me again what your character is. "With Ennio, you have to speak with adjectives and comparisons. I ask him, "Did you see the Walt Disney movie, 'The Beautiful and the Tramp'?" "Well, for me, Cheyenne is the tramp." He's a thief, a romantic, a clever, not a reliable, but at the same time, he knows what love is. "

Sergio Leone explained why he had given up the music composed by Morricone for the long opening sequence of Once Upon a Time in the West :

When I placed the noises, without music, the drop, the windmills, the wind, the fly, the train that was coming, there was a fantastic atmosphere that was already a great piece of music. And when I finished with my mixer the two coils, I said that I was not going to place the music, but leave like that, because I found it so much more exciting these sounds. Finally, after the end of the mix, we watched everything, and Ennio, who this time was there, looks at the first two reels without his music. He was used to doing what I wanted, but suddenly he got up, came next to me, and said, "Can I tell you something Sergio? It's the best music I've composed in my life." 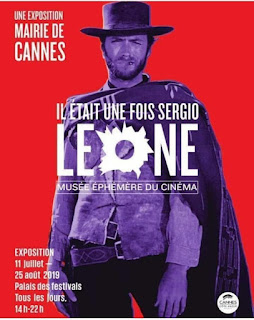