Who Are Those Guys? ~ Ilarion Ciobanu 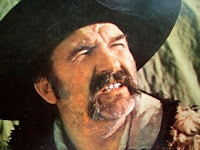 Ilarion Ciobanu was born in Ciucur, in Tighina, then part of Romania on October 28, 2931. He grew up in Constanta, on the seashore. At 12 years of age he became a shopman, after which he followed a long caravan of trades: porter, farmer, tractor driver, ditch digger, carpenter, driver, sailor, fisherman until 1958, when he entered the IATC, but he did not graduate, because he had a choice between doing "Setea" and attending the institute.

As a rugby player he made his debut in 1948, at Bucharest Science, under the guidance of coach Gustav Fanella. He then transfers to Dinamo Bucharest, where he now dedicates himself to be an athlete. He spent the last part of his career at Bucharest Progress (1959-1962). The second-line player, known as Claris, Ilarion Ciobanu was then considered a fearsome forward, hard to pass on, as hard in the good sense of the word, so fair.

His debut as an actor's came at the age of 30 in Setea, starring opposite Ion Besoiu and Amza Pellea, respectively with Stefan Ciubotarasu and George Calboreanu in “Omul de lângă tine”. Then more than 50 films followed, in which actor Ilarion Ciobanu played many main roles. He was also the director of “Omul de lângă tine” and “Mara”. After 1989, Ilarion Ciobanu continued to play only occasionally in films such as “Crucea de piatră”, “Ultimul bordel, Terente”, “Regele bălților”, “Tancul și Bored”.

At the first edition of the International Film Festival of Bucharest, BiFEST, in 2004, the actor received the Excellency Award for his contribution to the art of cinematography, where the audience applauded him for several minutes.

Ilarion Ciobanu died on the morning of September 7, 2008, of pharynx cancer. According to his own wish, his body was cremated at Vitan Barzesti Crematory, and his ashes were scattered over the Black Sea.