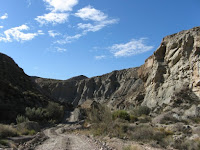 Rambla Indalecio is located a few hundred meters north of Rioja (a town 12 miles north of the city of Almeria), at the foot of Mount Alfaro, and used in various films, often associated with the locality Balsicas de Alfaro. About half a kilometer from the mouth of the rambla stands a large rock, which is used in a scene in “A Fistful of Dollars” (1964), shot by Franco Giraldi as director of the second unit, in which Clint Eastwood, heading towards the farmhouse where Marisol is held prisoner, descends from an escarpment. Giraldi used the same rock (and with the same angle) in the film “Sugar Colt” (1966) in a scene in which we see the protagonist riding in the rambla. The same rock also appears in the “Gunmen of the Rio Grande” (1964); “The Man from Nowhere” (1966); “Blood and Guns” (1969); “Indiana Jones and the Last Crusade” (1989). A narrow blind canyon that opens on the right side of Rambl Indlecio, a few hundred meters before the ascent to Balsicas de Alfaro, is used as a hiding place or in scenes of chases and ambushes in the films “Pistol Don’t Argue” (1964); “The Tall Women” (1966); “The Deserter” (1970); “Chato’s Land” (1971) (the refuge of Chato’s family); “The Hunting Party” (1971). At the mouth of this narrow side canyon is the set of the mine of “The Ruthless Four” (1968) was built. 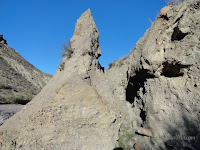 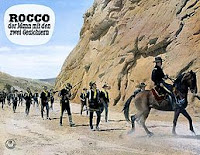 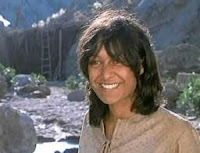