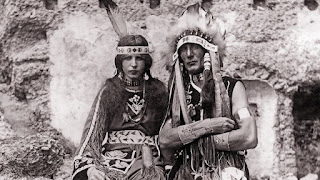 One day in the fall of 1919: Munich's strollers walked along the banks of the Isar to the south without any idea, when a troop of 30 formidable figures came toward them. The men have soot-blackened faces and move in the direction of Geiselgasteig, they also carry weapons. The excursionists alerted the police, who rushed in and turned to spectators.

As the actors Joe Stöckel and Fritz Kampers turned the corner, it turned out: There is no evil gang of robbers at work – they were there filming. "The Indian-Lilly", the name of the film by director Peter Ostermayr. It is one of about 20 so-called Isar Westerns, which caused a sensation after the First World War.

The shorts were produced quickly as cheap films by pioneer Munich film pioneers - and were immensely popular. Because shortly after the First World War there was an import ban for US films. Isar-Westerns such as "The Black Jack" (1918) or "The Vultures of the Gold Mines" (1919/20) simply had no competition, but did have an enthusiastic fan base, especially in Bavaria.


"There has always been a strong propensity for the exotic and oblique in this country, a special pleasure in the disguise," says Hermann Wilhelm, 70, author of the recently published photo book "Wild West Munich". The artist and local historian were looking for the beginnings of the Bavarian Wild West mania and were convinced: Just the costume connects the two cultures. "Here the Bavarians in lederhosen and Gamsbart or a feather on their hat, there the 'Indians' in leather costume and feather headdress."

The trigger for this Bavarian splurge is, according to William, the famous bison killer William Frederick Cody - the "Buffalo Bill", the most photographed human being of the late 19th century worldwide. With his "Wild West Show", the American entertaine was a guest from April 19 to May 5, 1890 at the Munich Theresienwiese.

Around 200,000 people, including Prince Ludwig (later King Ludwig III) and his family, flocked to admire the buffoon celebrated in Bavaria as the "Ox-Willy". Those who did not get a ticket tried to get hold of one of the rare window seats in the surrounding houses.

Buffalo hunts and horse races, "Indian" dances and songs were presented, as well as the "Raiding of an emigrant train by Indians and the defense of the border residents". Buffalo Bill's entourage tracked General Custer's last fight at the Little Big Horn. And legendary shooter Annie Oakley shot the cigarette out of her mouth as a target "thirty yards away."

The climax, however, was gunslinger Buffalo Bill himself. "He always appeared as a rescuing angel and shot the Indian chiefs," enthused the "Munich newspapers". The fact that Buffalo Bill - like Völkerschau host Carl Hagenbeck and Sarrasani-circus pioneer Hans Stosch - exhibited people like zoo animals and his version of the Wild West long ago belonged to the past did not bother the astonished audience at that time.

Also, no one took offense that the show star in the US had helped drive the eradication of the American bison and thus robbed the natives of one of their most important livelihoods. Munich reveled in Wild West fever - and vice versa, the US visitors also warmed up for the Bavarian cultural heritage.

According to contemporary reports, Buffalo Bill's "Native American" employees strolled through the town's inns, and at Gärtnerplatz they watched a dialect play in full gear. And they gave so much applause to the Schuhplattler until the Bavarians repeated their folk dance.

"To play 'Indians and trappers' is the wish of all," wrote the "Generalanzeiger" about the enthusiasm of the people of Munich. Numerous clubs emerged and recreated the supposedly great life in the land of opportunity. Local historian Wilhelm speaks of a "veritable boom".

The beginning was made in 1894 by bicycle pioneer Heinrich Zierle. After an alleged Buffalo Bills challeng (and lost) to the Munich cyclist Josef Fischer to the "Radl-Pferd" competition, Zierle founded the Velociped Club Wild West in a tavern. Instead of riding on horseback, the members cycled with a whip, a lasso and a revolver; they performed their tricks on a small wooden rondel.

Shortly thereafter, the American Club Buffalo Bill, the American Boys Club, and the Cowboy Club Munich North were created in Munich. And in 1913 the Cowboy Club Munich: nationwide oldest surviving club of its kind, built by three men who actually wanted to immigrate to America. Like so many Bavarians at the turn of the century. "Hundreds of thousands were looking for their happiness overseas," says local historian Wilhelm, who heads the Haidhausen Museum in Munich.

The brothers Fred and Hermann Sommer and Martin Fromberger founded the Cowboy Club initially as a Losverein Wild West: They wanted to travel to the USA with lottery winnings. But only once had the men any luck - in the Vogelschutzlotterie they won 40 marks.

Westerns without a shot and scream

So the prevented emigrants stayed in Munich and indulged in their longing for wilderness and expanse at the foot of the Alps. A desire that served Karl May's "Winnetou" novels as perfectly as the 1918 produced, now only a fragmentary surviving Isar Westerns: They were filmed with daylight and contained much action and fighting, but had to do without silent screams and screams as silent films ,

Many Munich film pioneers, including the early film companies Arri and Emelka, sought their entrepreneurial luck in the Western. According to film scientist Thomas Brandlmeier, the advantages were obvious: you did not need expensive equipment, decoration, a studio or particularly gifted actors - and as a location there was a free postcard local idyllic in the south of Munich.

The picturesque Palatinate Palatinate also served as the former shooting men's venue: parallel to the Isar-Westerns, the so-called Neckar Westerns were created in the regions between Heidelberg and Ludwigshafen.

Actor and producer Josef Stoeckel, who called himself Joe, staged a whole series of Isar Westerns, which according to his statements "were released to the whole world as a result of the real exciting presentation". In fact, the masked Heimatfilme seldom even made it to Berlin. Critics often ridiculed the fact that cowboys had dachshunds, for example, or Bavarian-style interiors were barely covered with "stars and stripes".

"With Munich suburban cars from California to New York"

For example, a reviewer of "The Revenge in the Gold Valley" (1920) found that "not a single scene is American". And at the Isar Western "The Battle for the Gold Find" (1920) criticized a journalist, "that one travels with Munich suburban cars from California to New York".

The cinemagoers liked it anyway. Above all, they delighted in grandiose landscape shots and risky action scenes. After 1921, however, it was the end to the Western Klamauk to Isar and Neckar: The US competition was back with real Western on the market, at the same time continued the galloping inflation of the first heavy German Western wave.

Wild West fans remained in Munich even without their Dahoam Westerns. And until this day, as the illustrated book by local historian Hermann Wilhelm shows: where approximately one hundred members of the Cowboy Club Munich meet regularly in the club's ranch in Thalkirchen. Here, Bavarian office workers, housewives and pensioners turn into buffalo hunters, squaws and Lakota warriors on weekends - and between 3000 and 5000 people nationwide do the same, as the Western Bund as an umbrella organization estimates.

And why shouldn’t there be new Westerners from the German South? For the 100th anniversary of the film company Arri launched together with the College of Television and Film Munich, an author's contest to revive the Isar-Western. Two scripts are already available - from 2020, according to the production company Suedstern Film on the banks of the Isar once again will be brought out the lasso. 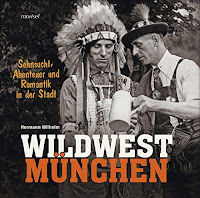