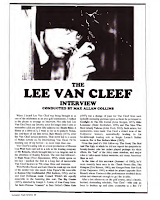 When I heard Lee Van Cleef was being brought in as
one of the celebrities at an area golf tournament, 1 rushed
to the phone to arrange an interview. Not only had Lee
Van Cleef been my favorite actor for longer than I care to
remember (did you drive fifty miles to see Death Rides A
Horse at a drive-in?), I went so far as to pattern Nolan,
the anti-hero of my first novel. Bait Money (1973), after
the Van Cleef screen persona. That novel led to a series
of Nolan novels; so, by interviewing Van Cleef, I’d be
meeting one of ray heroes - in more ways than one.

Van Cleef's leading role in a local production of Heaven
Can Wait back east led to a role in the louring company
of Mr Roberts, which brought him to Los Angeles and to
the attention of Stanley Kramer. The role that followed -
in High Noon (Fred Zinneraann, 1952), which opens on
his face - marked the first in a long line of memorable
Van Cleef heavies in ’50s crime films and westerns.

With Neville Brand and Jack Elam he made up one third
of the sinister trio who made John Payne’s life miserable
in Kansas City Confidential (Phil Karlson, 1952); and he
and Earl Holliman made Cornell Wilde’s life equally
miserable in the haunting film noir. The Big Combo
(1955), directed by Joseph L. Lewis, of Gun Crazy fame.
An Indo-Chinese "commie" in Sara Fuller’s China Gate
(1957) was a change of pace for Van Cleef from such
typically menacing gunman types as those he portrayed in
Gunfight At The OK Corral (John Slurges, 1957), Ride
Lonesome (Budd Boetticher, 1959) and The Man Who
Shot Liberty Valance (John Ford, 1962). Such minor, but
memorable, roles made Van Qeef a virtual icon of the
Hollywood western, undoubtedly leading to his
breakthrough leading role in Sergio Leone’s Italian
western. For A Few Dollars More (1965).

From this (and it’s 1966 follow-up. The Good, The Bad
And The Ugly, in which he did not repeal his sympathetic
bounty-hunter role but rather played perhaps his vilest
villain, the 'bad" of the title) came stardom, and major
roles in tailor-made Italian westerns, and many American
films as well.

At the time of this interview (Summer of 1982), he’d
more recently been seen in the Chuck Norris film. The
Octagon (Eric Karson, 1980), and Escape From New York
(John Carpenter, 1981) in which he played opposite Kurt
Russell, whose Eastwood-like performance troubled those
critics not observant enough to get the in-joke.

After a hot afternoon on the golf course, amid a hectic,
harried, demanding schedule. Van Cleef - with only an
hour to freshen up and drive crosstown to a live TV
interview, half of that time to sit and chat with me
about his films, with an ease and graciousness that belied
his often-sinister screen image. A tall, rugged-looking man,
more youthful in person than on the screen, Lee Van
Cleef was an affable enigma - a no-nonsense "tough guy"
riglit out of his movies - who in his spare time enjoys
painting and art (a subject we unfortunately did not have
time to explore).

He seemed vital and healthy, and the notion that he
might be gone, in a few short years, never occurred to me.
I’m glad I had the chance, however briefly, to meet with
him. 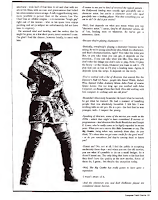 LVC - Well, that depends on what you mean when you say"character actor." I mean, they’re all character actors, ailof ’em, leading men or whatever. So we’ve got a misnomer, there.

Basically, everybody’s playing a character because we’re acting. So we’re doing somebody else, which is a character, and that’s characterization, right? You take the roles you like, or you take what you can get, it depends on the situation... if you can take what you like, fine, then you don’t take the things you don’t care to play. Now, I’ll play the heavy - or the villain, whatever you want to call it - I’ll play that just as fast as I’ll play a leading man. Again, it depends upon the script. It depends on the story.

You’ve worked with a list of directors that sounds like the
Director’s Hall Of fame - people like Raoul Walsh, Robert
Wise, Samuel Fuller, Anthony Mann, John Ford, of course
Sergio Leone. Not too long ago you worked with John
Carpenter, on Escape From New York. How did working with
him compare to working with the old pros?

Speaking of directors, some of the movies you made in the
1950s - which then might’ve been considered B movies or
programmers - had directors like Budd Boetticher and Joseph
E. Lewis, who’ve really come to be highly regarded in recent
years. When you see a movie like Ride Lonesome or say. The
Big Combo, being taken very seriously these days, do you
think, "It’s about time we got some credit for the good work"
or do you sometimes feel they’re coming back to haunt
you?

LVC - Haunt me? No, not at all. I feel the public is accepting mediocrity these days - and when you see the old movies, you see what it’s possible to do on a small budget. So it doesn’t haunt me. The only thing that hurts is the fact that they don’t have the quality in the new movies. Some of them do, I guess... but they’re the exception today.

Well, The Big Combo has really gotten to have quite a
reputation.  And the characters you and Earl Holliman played are
considered classic heavies. 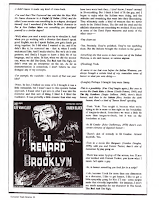 LVC - I wasn’t aware of it. I didn’t know it made any kind of come-back.

I've read that Clint Eastwood has said that the Man With
No Name character in A Fistful Of Dollar (1964) and the
other Leone movies was something he, to a degree, developed
himself. And I wondered if the Man In Black character in
For A Few Dollars More was something you developed
yourself to a similar degree?

LVC -   Well, when you read a script you try to visualize it. And when you go working with a director that doesn’t speak good English, nor do I speak Italian, you gotta kinda get along together. So I did what I wanted to do, and if he didn’t like it, he corrected me - that is, when I could understand him. And I really tried to. But we’d do it with gestures, and finally I began to learn a little bit of his language, and he mine. In fact, when we did the second one, when we did The Good, The Bad And The Ugly, we didn’t even use an interpreter on the set. As far as characterization is concerned, I don’t believe he ever changed any of my concepts.

For example, the wardrobe - how much of that was your
idea?

LVC - None. In fact, I balked on some of it. I thought it was a little outlandish, but I wasn’t used to this operatic Italian approach. I found after I got into it, after I was into the character and that sort of thing, I liked it. I liked the machismo. It was probably a little dressier than what may have been worn back then... I don’t know, I wasn’t around in 18-something. But I think it kind of fit the guy, and I began to enjoy what the Italians were doing, and the attitudes and everything that went into their filmmaking. They ultimately made a kind of western that we never made in the United States. The dirt and the crud and the nihilistic characters are something we avoided. If you look at some of the Errol Flynn westerns and some of the other ones —

LVC - Yes. Precisely. They’re polished. They’re too sparkling clean. But the Italians brought the realism to the genre.

Something else that seems to have come out of the Italian
Westerns, is the dark humor, to various degrees.

It seems to me that even before the Italian Westerns, you
always brought a certain land of wry, masculine sense of
humor to what you were doing

LVC - (Laughs) Perhaps I thought they were funny.

This is a possibility. (Van Cleef laughs again.) But even in
movies like Death Rides A Horse (Giuilo Petroni, 1969) and
The Big Gundown (Sergio Sollima, 1968), there’s black
humor; and then in the Sabaia films, besides the dark
humor, there's a kind of "James Bond" spoofing.

Even in a movie like Barquero (Gordon Douglas,
1970), with you and Forrest Tucker, there’s a lot of
humorous by-play going on.

LVC - There was some by-play off the screen, too. If you ever worked with Forrest Tucker, you know what I mean, he’s quite a guy.

So, is humor something you look for in a script?

LVC - I do, because I look for more than one dimension in a character, I like to get humor, I like to get alittle sympathy going for him if I can - some script smake that virtually impossible - for instance, I don’t see much sympathy for my character in The Good,The Bad And The Ugly. 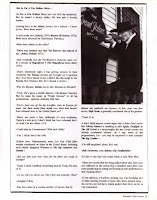 But in For A Few Dollars More—

LVC - In For A Few Dollars More you can find the synipatliy. But he wasn’t a heavy, either. He was just a bounty hunter.

Getting back to the Sabata movies, for a minute - 1 know
of two. Were there more?

Were there others in the series?

LVC - There was another one that Yul Brynner did instead of me. (Adios, Sabata 1971)

And, ironically, you did Yul Brynner’s character once, too.
In a remake of Magnificent 7 {The Magnificent Seven Ridel,
1972).

LVC - That’s absolutely right, I was getting around to that; everytime the Sabata movies are brought up I mention that. You were ahead of me. I didn’t like the script to the Sabata that Brynner did. So I turned it down —

Was the Brynner Sabata movie also directed by Parolini?

LVC - Yeah. He’s quite a stylish director. Gianfranco Parolini.But he signs his name as "Frank Kramer" to all his productions, enjoyed working with him.

You’ve been one of the big box office stars in Europe for
years. Are there many films made over there that haven’t
been released here in the United States yet?

LVC - There are quite a few. Although it’s very confusing.There’s a war story I don’t think has been released here. At least I’m not aware of it.

Could that be Commandos? With Jack Kelly?

{Editor note: Unfortunately, many Lee Van Cleef films
remain unreleased on video in the United States, including
such classic Spaghetti Westerns as The Big Gundown and
Sabata.)

Did you dub your own voice for the films you made in
Europe?

LVC - Yeah. I think I dubbed everything myself. Yeah, I’m sure of it.

Let me ask you about Lee Van Cleef and posterity. Okay?

You have been in a certain number of movies that by
almost any yardstick are classics; in fact, your very first
movie, High Noon, is generally considered one of the greatest.

I don’t think anyone would argue that a John Ford movie
like Liberty Valance is anything to take lightly; Gunfight At
The OK Corral is a heavyweight; the two Leone movies are
already considered classics. As I say, some of the
programmers, too • you may be surprised to even consider
The Big Combo —

LVC - I’m still surprised about that one.

LVC - I’d like to see that one come back; a cute little film.

These are movies that are being talked about a lot. Have you
ever reflected on the notion that a hundred years from now
some people may be sitting and looking at your performances
and enjoying them?

LVC - If I’m still here. I’ll still be making ’em. I’m watching alt of films starring friends of mine who have passed away -the movies are still here, which makes them here, as far as I’m concerned.