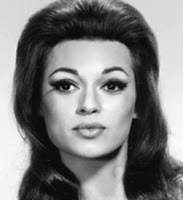 American singer, dancer and actress Fran Jeffries died in Los Angeles on December15, 2016. She was 79. Born Frances Ann Makris in Mayfield, California on May 18, 1937 she performed on stage with her then husband singer Dick Hames from the late 1950s to their divorce in 1965. Fran then married producer, director, writer Richard Quine and appeared in his film, her only Euro-western, “A Talent for Loving” as Maria in 1969.
Posted by Tom B. at 8:07 AM