His dad was 'The Bad' 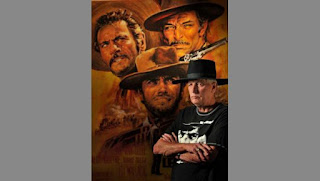 During the week, he’s a sales engineer for Certified Control Systems. But every so often, the 69-year-old Jacksonville resident breaks out “The Bad” T-shirt.

It’s a black shirt with the face of the late actor who starred in “The Good, the Bad and the Ugly” and during a four-decade career set the bar for Hollywood bad guys.

When Alan Van Cleef wore the T-shirt to Epcot one Father’s Day, several people commented on it. One woman even looked at the face on the shirt — the steely eyes and chiseled features — and at the tall, lean man wearing it and made the connection.

“Are you related?” she said.

Yes, he said, explaining that there is a reason he calls this his Father’s Day T-shirt.

While director Sergio Leone made sure Lee Van Cleef would forever be known as “The Bad,” Alan Van Cleef always knew him simply as Dad.

On screen, Lee Van Cleef played some of the most cold-hearted characters, capable of creating fear with little more than a squint or a smile. At home, though, he played a very different role. His oldest child can vouch for the accuracy of the headline that once ran in a tabloid newspaper: “World’s baddest bad guy is a pussycat at home!”

“He wasn’t a disciplinarian,” Alan Van Cleef said. “He let my mom do that. He wasn’t good at that. He’s probably one of the nicest guys you’d ever want to meet.”

When his father went out in public, he could be intimidating, often without even trying.

Alan Van Cleef tells the story about the time his dad took him and his two siblings to Knott’s Berry Farm, a California theme park. One of the most popular features is a train ride that includes masked robbers hopping aboard the train, waving guns and engaging in a mock holdup that includes a heavy dose of comedy.

“He was sitting on the aisle,” Alan Van Cleef said. “I remember it vividly. Here come the guys to rob everybody on the train. They see him and they just stop, turn around and leave.”

Never mind the bandit’s usual punch lines — “This is a tax audit!” — what could be funnier than the bad guys seeing the ultimate bad guy and heading for the doors?

Alan Van Cleef’s early childhood was spent in New Jersey. That’s where his father worked in a factory and as an accountant, appearing in local plays, before getting a part in a touring production of “Mister Roberts” and catching the eye of a producer who wanted to cast him as the deputy in “High Noon.” With a stipulation. Get a nose job to make his face look less menacing.

He declined. Lloyd Bridges became the deputy. Lee Van Cleef ended up as the bad guy who first appears on screen in “High Noon,” beginning a path that led to 90 films and more than 100 television roles. Perhaps none is more memorable than a story set in the American West during the Civil War, shot primarily in Spain, directed by an Italian, using mostly local cast and crew — thus, the genre known as “spaghetti Westerns” — along with three American actors: Clint Eastwood, Lee Van Cleef and Eli Wallach.

It initially was released in Italy on Dec. 15, 1966, the third of the Dollar trilogy (preceded by “A Fistful of Dollars” and “For a Few Dollars More.”) Audiences loved it. Critics gave it mixed reviews.

The late Roger Ebert was among the critics who instantly embraced it after its 1967 U.S. release, making references to Hitchcock and Dickens when he wrote that while other Westerns were bombing at the box office, the Dollar movies succeeded with their understanding of the Western bad man — “mysterious, without name, absolutely ruthless.”

Alan Van Cleef was in college when “The Good, the Bad and the Ugly” came out.

His parents divorced in 1958, when he was about 13 years old. He went to high school in Athens, Georgia, but continued to visit his father in the summer. And after graduation, his father suggested he come to the set of “Barquero” and see if he might want to pursue some sort of career in movies.

“I was going to get drafted, so I decided to just go in on my own,” he said.

When he came back, he ended up in Kentucky, where his wife is from, and decided to “just get a real job.” His job led him to Jacksonville in 1978. His three children grew up here. His brother ended up in North Florida, too.

Through the years, he maintained some contact with his father. He has photos of him playing with his daughter. And when Lee Van Cleef had a small role in a 1989 Burt Reynolds movie — a grandfather skipping stones with a grandchild — Alan Van Cleef ribbed him, asking when he was going to come to Florida and do that with his own grandchildren.

But then he found out he had throat cancer and, on December 16, 1989, he died of a heart attack. He was 64. Alan Van Cleef traveled to California for a service with a eulogy delivered by Rance Howard, father of Ron Howard, and mourners such as Clint Eastwood.

More than 25 years later, there are reminders of the family lineage in Alan Van Cleef’s house (an oil painting from the Paris premiere of “The Good, the Bad and the Ugly” hangs on the wall) and on his cellphone (when it rang during our interview, the tone was the whistle from the movie’s soundtrack). And the movie not only has gained critical acclaim, it still has fans.

Alan Van Cleef’s middle son has his name — Alan Lee Van Cleef — but he goes by Lee. He’s an engineer and an officer in the Air National Guard. He was on the other side of the world and introduced himself as Lt. Lee Van Cleef, catching the attention of a general. For the next 30 minutes, they ended up talking about his namesake.

Quentin Tarantino has described “The Good, the Bad and the Ugly” as his favorite movie and “the greatest achievement in the history of cinema.” In a 2012 Playboy interview, when asked who set the bar highest for bad guys, Tarantino mentioned one actor: Lee Van Cleef.

Tarantino dedicated “Kill Bill Vol. 2” to eight men, including Lee Van Cleef. And he sent a poster of one of his movies to Alan Van Cleef.

“It’s still on my desk somewhere,” he said. “I’m not a big Tarantino fan.”

When the Academy Awards were held, “The Hateful Eight,” a Western set in a post-Civil War blizzard, was up for three Oscars, including best score for the music of 87-year-old composer Ennio Morricone — the man responsible for the memorable soundtrack of “The Good, the Bad and the Ugly.”

“The Good, the Bad and the Ugly” didn’t win any Academy Awards. It wasn’t even nominated. But 50 years later, the movie still is everywhere, from T-shirts like the one Alan Van Cleef sometimes wears to the ubiquitous uses of the movie title. Lee Van Cleef’s oldest son has seen it so many times — several dozen times, he estimates — and has many copies of it on DVD, VHS and Blu-ray. Besides, it doesn’t stand alone as his favorite movie with his father in it.

He also has a soft spot for “El Condor.” While critics mostly panned the 1970 movie starring Jim Brown and his father, Alan Van Cleef says that was his father’s favorite role.

“He pulled off comedy as well as seriousness,” he said.

In other words, he played a role more like the one Alan Van Cleef remembers, the one of a dad who is quite different from “The Bad.”
Posted by Tom B. at 6:30 AM