Who Are Those Guys ~ Dick Butkus 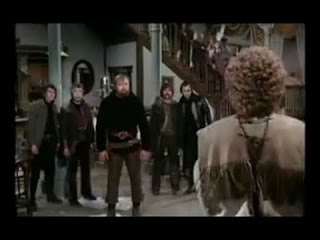 Richard Marvin “Dick” Butkus, was born in Chicago, Illinois, December 9, 1942. He graduated from the University of Illinois in 1964 where he was a two time All-American linebacker. A first round draft pick of the Chicago Bears, Dick played for the Bears from 1965-1973, and was named All-Pro linebacker seven times. Mr. Butkus was elected into the NFL "Football Hall of Fame" at Canton, Ohio in 1979. Many football experts consider Butkus the finest linebacker in the history of football. After his football career Dick drifted into acting and has appeared in over 50 film and TV appearances including one Euro-western “Cipolla Colt” (aka “Spaghetti Western”) (1976) with Franco Nero. [Pictured above in black facing Franco Nero who we see from the back.]

Butkus married Helen Essenberg his high school sweetheart in 1963 while they were students at the University of Illinois. Together they have three children: Ricky, Matt, and Nikki. On August 24, 2013, Butkus was inducted into the National Lithuanian American Hall of Fame.

Dick formed the The Butkus Foundation to support many charitable causes such as I Play Clean Campaign which addresses the issue of steroids among high school athletes. The Dick Butkus Center for Cardiovascular Wellness a nonprofit organization in Orange County, California with a cardiac screening program that uses specialized testing to help identify those at risk of heart disease and sudden cardiac death and The Butkus Award, instituted in 1985, is one of the elite individual honors in college football and is awarded to the best linebacker in college football on a yearly basis.