50th Anniversary of the Premier of “The Good, the Bad and the Ugly” 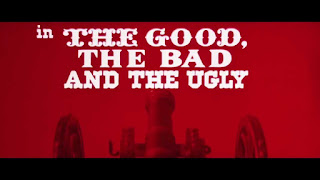 There seems to be some debate on when the actual premier of The Good, the Bad and the Ugly actually took place. A few say it was December 15, 1966 while most authorities say it was December 23, 1966. Neither side states at what theater in Rome the premier took place. My theory is a private showing may have taken place on December 15th and the general release took place on December 23. I’ve checked Sir Christopher Frayling’s book and he does not give a specific date, he just says December. In any case one of if not the greatest Euro-western of all-time was released 50 years ago this month.

Burgos, Spain held their 50th Anniversary celebration back in July of this year at a reconstruction of the Sad Hill Cemetery. Several of the local people who took part in the film as extras appeared along with luminaries like Christopher Frayling, the wife and daughter of Carlo Simi and set designer Carlo Leva.

Blondie (The Good) is a professional gunslinger who is trying to earn a few dollars. Angel Eyes (The Bad) is a hit man who always commits to a task and sees it through, as long as he is paid to do so. And Tuco (The Ugly) is a wanted outlaw trying to take care of his own hide. Tuco and Blondie share a partnership together making money off of Tuco's bounty, but when Blondie unties the partnership, Tuco tries to hunt down Blondie. Capturing him Tuco forces Blondie to walk through the desert. It’s here they come across a carriage loaded with dead bodies, they soon learn from the only survivor (Bill Carson) that he and a few other men have buried a stash of gold in a cemetery. Unfortunately Carson dies and Tuco only finds out the name of the cemetery, while Blondie has learned the name on the grave. Now, needing each other, the two must keep each other alive in order to find the gold. Angel Eyes (who had been looking for Bill Carson) discovers that Tuco and Blondie met with Carson and knows they know the location of the gold. When the two show up in Betterville Prison Camp, Angel Eyes is temporarily in command of the post and tries to find out the information. After brutally beaten Tuco spills the name of the cemetery but knowing Blondie would never talk Angel Eyes takes the place of Tuco as Blondie’s new partner and head off for Sad Hill. On the way Blondie and Tuco are reunited and the duo eliminates Angel Eye’s henchmen. Arriving at Sad Hill they arrive at the grave of Arch Stanton where Tuco is forced to dig up the coffin. Angel Eyes arrives and the trio have a duel in the center of the graveyard. After Blondie kills Angel Eyes they return to the task of retrieving the gold. Blondie confesses he gave Tuco the wrong name and it is the one marked unknown next to Stanton’s grave. After digging up the 200,000 in gold Blondie forces Tuco to stand on a wooden cross grave marker and slip a noose around his head. He takes his share of the gold and rides off as Tuco stands precariously on the cross. Suddenly Blondie appears a few hundred yards away and shoots the rope freeing Tuco. The two have terminated their partnership once and for all and go their own ways. 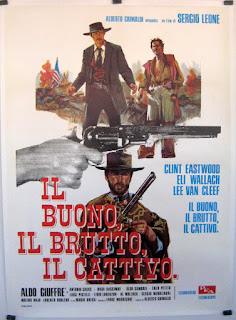 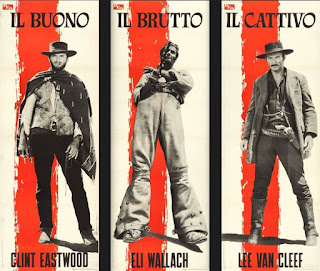