Who Are Those Guys? ~ Eros Buttaglieri 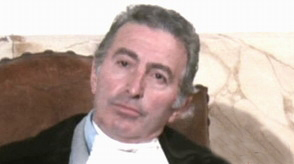 Eros Buttaglieri was born in Bagnolo di Po, Rovigo, Italy in 1925. He was a painter who emigrated to Rome to perform his military service and decided to stay there, starting to work first on television, then in the cinema next to such important figures as Alberto Sordi, Clara Calamai, Alida Valli, Massimo Serrato, Luchino Visconti, Mauro Bolognini and Franco Zeffirelli. Obviously he was never  a huge star, but made enough films to make a living and be happy, maybe dreaming of something more, as in 1981 when he played a lawyer of the Marquis Onofrio Del Grillo in " Il marchese del grillo" by Mario Monicelli, along with Alberto Sordi. As a boy he lived in Ficarolo and, once, said that once at the local cinema he stole a poster for the film "Anna Karenina" by Clarence Brown, 1935, with Greta Garbo, Fredric March and Basil Rathbone. That poster Eros attached to the wall near his bed and, for years, every night, before falling asleep he stopped to look at it daydreaming. As fate would have Eros, on two occasions, in 1970 and in 1995, found himself starring in two television drama series loosely based on the popular novel by Lev Tolstoy directed, first by Sandro Bolchi in a production for RAI and then by Fabrizio Costa for Mediaset . In the first "Anna Karenina", Eros starred alongside Lea Massari, Giancarlo Sbragia, Pine Coalizzi, Marina Dolfin, Valeria Ciangottini and Sergio Fantoni; while five years later he worked with Carol Alt, Philippe Caroti, Joachim Fhuchsberger and Adriana Asti. Somehow, the dream came true. In an interview in 2000 at one of his painting exhibitions, he said: "I do not reckon too much for politics, not even the humanity that sometimes offended me. I seldom paint men and only from behind, I do not care to see their faces." Eros has not lead an easy life, but, beyond that of coincidences and games of fate it has been rewarding. It was at that "Roman World" made of small jobs in large productions, auditions, parties, lounges, knowledge and events, that Eros met, one evening, the "master" Ghiglia who detonated his passion for painting, and his destiny changed again. He became a full time French impressionist painter. I’ve been told a memorial poem can be found on line which un fortunately I could not locate so it appears Eros has passed away.