Karl-May films even ran in US military bases


The Christmas exhibition in the Karl-May-Museum shows rare and curious filmmakers from Winnetou and Old Shatterhand from all over the world. 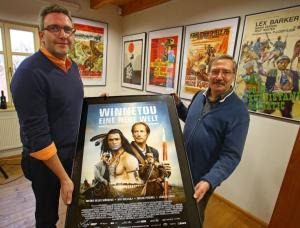 Hohenstein-Ernstthal. Determined, Old Shatterhand holds the gun in his hand. Even more determined than usual, with a sixth finger on his hand. In the Japanese film score to "Winnetou 2", the draftsman apparently went into minor errors when he portrayed the friend of the Apache with a finger too much in the left hand. And yes: Winnetou 2 has actually run in Japanese cinemas. Just like four other Karl May films, all of which were "glaring" over the Asian screens, as May fan Stefan von der Heiden says.

For the Christmas exhibition, which was opened yesterday at the Karl-May-Haus, the collector has searched through his private archive. He has picked out the 25 most interesting specimens from 1000 posters, which he has been able to acquire all over the world, and has made it available to the museum for the exhibition, which was opened yesterday. Film, TV and stage shows, which are 90 percent from the collection of the two Berlin collectors Hartmut Schmidt and Stefan von der Heiden.

There would be, for example, the first and so far only film catalog from the USSR: Old Shurehand, printed on budget paper, presumably at the end of the 1960s. "Karl May was the export camp of German film par excellence," says von der Heiden. Winnetou and Old Shatterhand were also a hit in Latin America and the USA. "The treasure in the lake of Silbersee" ran loudly from the heathen even in Vietnamese US military bases. The design of the posters also always reveals something about the social environment and the zeitgeist, says von der Heiden.

While Danish filmmakers have always had a bit of kindergarten drawings towards the end of the 1960s, the Italian counterparts are full of sex. "A female breast on these posters is actually always bright," says the collector. He often visits film archives in countries where he suspects that Karl-May was at the movies. Thus, the Berliner found out that "Untergeiern" already inspired the audience in Kurdistan and Singapore. His personal fundus also includes original silver box from a film or Winnetou's original costume - but also 1000 filmplates. On the basis of this selection alone, André Neubert, head of the Karl May House, can only recommend to everyone to look at the original posters: "We have exhibited the most beautiful, most valuable and rarest." The cover image for the flyer of the exhibition "Plakate - Maysterige Fernseh- Film- und Bühnenplakate" was drawn by the cartoonist Marko Öser. Winnetou and Old Shatterhand as a residential community, which can watch themselves on television.

To the opening of the exhibition, the theater director Gerd Schlott also announced that a special theater performance is planned for the 175th birthday of Karl May, which is due to take place on 25 February of the coming year. At the Uhlig mill in Bernsdorf, the original location of the Karl May classic "Das Buschgespenst", the amateur playmaker "Theatergruppe der Baldauf Villa" from Marienberg wants to stage the play in its original environment. "We are still looking for those who are interested in playing in this play"; Says Schlott.