Johnny Manila was a gunfighter and was designed by Western Bonelli. In 1973 the drawings were assigned to Studio DiVitto and Onofrio Bramante with P. Franco (Franco Picchionni) and Studio Par assigned to design and draw the covers. Mario M. Giulia was the director responsible for the publication which began in 1971 and lasting until 1973 with a total of 24 issues being released. Volume two was released from 1975-1977 with another 24 issue produced. The comic books were 112 pages long. A collection  of the series was released as well as a reprint of the 1974  FRONTIER. 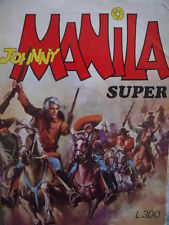