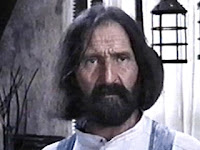 Italian actor and stuntman Osiride Pevarello died in Rome, Italy on December 15th he was 96. Pevarello was one of 19 children who were all part of a circus family. He was an acrobat and later was a member of the Italian army for 20 years before making his screen debut in 1949’s “Il mulino del Po” by Alberto Lattuada. He would go on to have a 40 year career as a character actor and stuntman. Osiride may have appeared in more Euro-westerns than any other actor. I have him listed in 61 westerns myself. Once you became familiar with his face you would see him all the time playing saloon patrons, brawlers, gang members and henchmen. He was the brother of actor, stuntman Renzo Pevarello [1924-2014]. He was married and 13 children of which only 4 lived to adulthood.