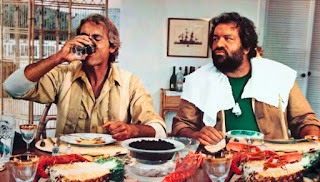 Bud Spencer & Terence Hill, popularly called Bud & Terence, with their stories, their incredible fistfights, their immortal diet of beans (but not only), have welcomed and entertained tens of generations around the globe. Retracing the career of the duo, we could only tell it step by step, selecting the funniest, hilarioys and immortal scenes, that the Italian cinema has ever made.

All of us has seen and enjoyed the iconic pair of Italian film actors Bud Spencer and Terence Hill, personally I too have tried to imitate them at home, with relatives, with friends, some of their scenes, maybe biting into a chicken like it was the last thing left on earth or screaming for a giant plate of pasta and beans and almost coming to blows believing me to be Bud. In the evening reviewing on net for the umpteenth time many of their films, and always finding the same joy and excitement their fistfights and so on, including the familiar disbelief of so much joy just to see one of their movies on television. For younger people around questioning my enthusiasm for Bud & Terence it is difficult to comprehend, but to all those who lived through those years, and the golden decade of the spaghetti westerns Bud Spencer and Terence Hill are the couple par excellence, they are the brothers who I never had, when they are on TV or watching their films, even in the darkest days, everything seems to look better.

TRINITY IS STILL MY NAME!, (aka CONTINUAVANO A CHIMARLO TRINITA), from left, Terence Hill, Bud Spencer, 1972. 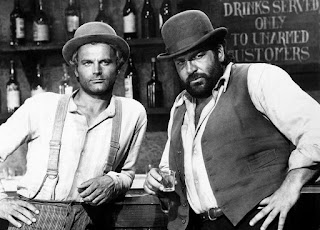 Many of the contemporary film-makers, who are involved in westerns or American blockbusters, art house movies or struggling with their first work should have an eye for their films and to study the scripts carefully because, as transversal works, capable of attracting any kind of audience, from adults to children, regardless of sex they are rare and difficult to beat.

Precisely for this reason we want to pay homage to the duo recalling some of the famous scenes, the funniest and iconic which have been taken from their movies because, not knowing at least one, it is to commit sacrilege. Remember them by heart ... it is all well and good, otherwise we get angry!