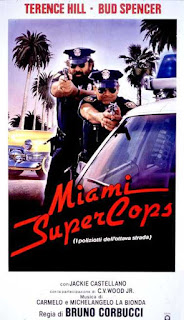 Steve (Bud Spencer) and Doug (Terence Hill) as well as being great friends have long been F.B.I colleagues. Steve, however, came out disappointed because of the justice system. Ten years after their last case, an opportunity presents itself for them to work together again: a robber they had put in a cell just ten years ago has served his sentence and has come to Miami to retrieve the loot tht was never found. The two decide, to help out their old boss, and to solve the case once and for all

Trivia: During the initial theme of the film we see some frames of five girls in bathing suits walking near a swimming pool. This same scene was taken from another movie of Bud and Terence: Even & Odd; When Bud is teaching Terence, indicates five girls with costumes almost all the same and asks what can Terence can relate them to in poker; and he is told Color Failure. The scene is completely identical.

Throughout the film the two protagonists use fake names while working undercover for the FBI, for business reasons, they infiltrate the Miami police department. For 99% of the film give their false names to all the girl informants. The only time the did not have say it happens when they manage to trap an illegal bookie who works for the villain and that information that needs to stop!