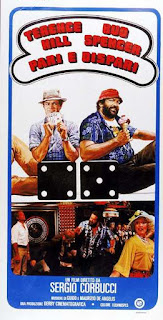 If you eat apples it’s booming!

Johnny Firpo (Terence Hill), a lieutenant in the Navy is dispatched to thwart a gang of illegal bookmakers, wher the Grekk Paraboulis is at the head of the operation. But such an envioronment is not practical so he seeks help from a former great gambler, which is also his half-brother: Charlie Firpo (Bud Spencer). The latter, initially unaware of the family relationship with Johnny, remains unaware of his brother's mission, but will eventually give him a significant hand.

Oh, you make an ice cream especially for me? I would like pistachio.
I do not have the pistachio!

Curiosity: In the film you hear two songs Oliver Onions who is heard in their other films: When Charlie prepares ice cream for Johnny, the music in the background is that of the film “The White, the Yellow, the Black, and in the room where Mike Firpo plays billiards, you hear the song “Angels and Beans”, the film soundtrack of “Even Angels Eat Beans”.