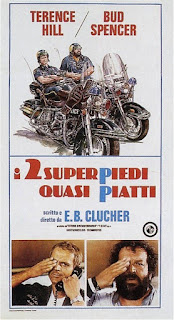 Look, "this is a robbery"  I tell you, please. You have the biggest voice.

Miami. Wilbur Walsh (Bud Spencer) and Matt Kirby (Terence Hill), two ruffians, meet at the port both looking for a job. Failing to find one they decide to rob the administration office of a supermarket but reach the wrong goal and instead enter the police recruitment office. Thus they are forced to enlist and attend the course for twenty weeks. After several failed attempts to get kicked out of the course, they end up becoming real cops, but keeping their brisk manner are a bit careless and a little 'rough. They are able to solve a murder case and to help a Chinese family.

You ready for some whiskey? "
Bud: "Yeah 'the first two gallons is fine but by the third I’ll become nostalgic and we can escape the quarrel ... And you ready?"
Terence: "Eh, what a question, I was nursed on whiskey!

Trivia: When Bud and Terence go to a restaurant, they bring two bottles of whiskey, once seated at the table in a few minutes they end up inviting everyone to drink with them, even the waiter a teetotaler, but in the continuation of the film, these two bottles seem never to be finished, throughout dinner they continue to drink ... but neither have brought only two? And they had not drained both the bottles immediately?