The story follows the adventures of little Nelson Bartholomew Miller Jr., who is sent away by his rich father, it grows up in the wild west becoming the fearsome gunslinger Philadelphia Miller Mancino. From there he has a series of dramatic events which leads to a tragic end, but he will remain in his son Arthur, who was born from his beloved Clara and grows up hiding the true identity of his father. Arthur now an adult will find himself in a more modern west (in the era of gangsters and prohibition), and must come to terms with his past. 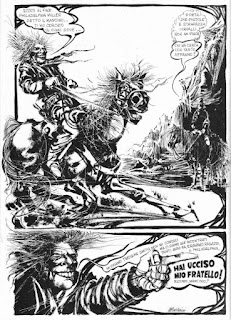 Early on he worked as an illustrator at the Corriere directed by Guglielmo Zucconi, with illustrations like those for "Mutiny on the Bounty" (from no. 31 to no. 35 of 1961, on Tolomei texts).

He was an art director for several publishing houses in the capital of Lombardia. In compiling his autobiographical notes, fifty years later, he will write in the third person: "He has worked hard to become famous and rich as a result, but has always gone wrong: almost every morning he goy out of bed, with the wrong foot."

He worked in many different venues from LP covers, to Playboy magazine clones to comic books to specialized magazines.

Maurizio would die from a heart attack he suffered in Milan, Italy on the night between the 12th and 13th of July 1987.