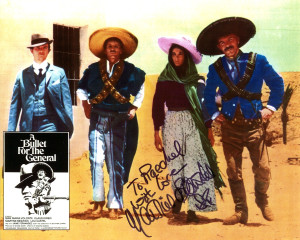 Well, it’s all been happening lately – at the weekend I met the actress Martine Beswick who starred in A Bullet for the General (dir Damiano Damiani, 1966) alongside Klaus.  I made my usual request for an interview regarding working with Klaus Kinski &c and, imagine my surprise, but not only did Martine say yes but she also said, “Yes, how about today?”

That’s a lesson learnt – not counting my chickens, I hadn’t taken my voice recorder along with me and I hadn’t drafted any questions either; next time I will make sure I am better prepared.

Anyway, all things considered I think the interview went amazingly well and I have to tell you that Martine Beswick was wonderful – she was warm, friendly, funny, very open and a joy to interview. 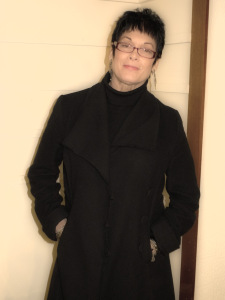 Please note, though, that as I was frantically scribbling notes during the interview and was unable to get everything down verbatim, I’m only quoting Martine directly where I know I got her exact words down.  For the rest I have recounted the conversation without direct quotes.  I hope this works, and if it doesn’t I only have myself to blame for not being optimistic enough to imagine the interview would take place there and then!

I started out by asking Martine how she got into acting because I’d heard that she had won a modelling competition during her teens in the 1950s in Jamaica and that she sold her prize – a car – to get the money for acting lessons.  This was not quite true as Martine had sold the car to get the money to move back to London where she wanted to pursue a career in modelling and acting; this was in the late 1950s.

In the early 60s she was eventually put up for a role in Dr No but did not get it because she was not considered experienced enough; then Terence Young decided that he wanted her for From Russia with Love (1963)…

Martine was only 22 back then and it was early days for the Bond films – they didn’t really know what being a Bond Girl meant in those early days – but she said, “It reached its zenith with Thunderball [in 1965].  That was a turning point; there was no private life for Sean Connery after that…”

DDS:  How did you get from Bond to A Bullet for the General?

Martine Beswick (MB):  “I went from From Russia With Love to some television work, then onto Thunderball, One Million Years B.C. and Prehistoric Women…” 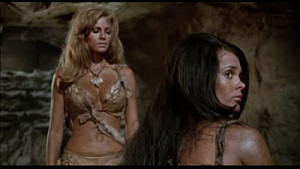 MB:  “Just leather bits in One Million Years B.C.!  There was a guy [at the film fair] earlier who in all seriousness said he had thought we [Martine and Caroline] would be appearing in our bikinis. You wouldn’t get me in a swimming costume now, let alone a bikini!” 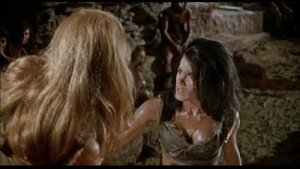 DDS:  And how did you get the role in A Bullet for the General?

DDS:  So did you enjoy working on A Bullet for the General?

Martine was dating the actor John Richardson (Revenge of the Vampire; She; One Million Years B.C.) back then and at the time he was also going to be in a Western in Madrid.  And, guess what?  He’d lied about being able to ride too!  The solution was to hire someone to give them both riding lessons in London’s Hyde Park.

MB:  “I was so sore!  It was so much easier in Spain, sitting on a Western seat.  I don’t know if you go riding but the seats they use for riding here are really small and uncomfortable.”

DDS:  Did the shooting go well?

MB:  “Yes, Damiano Damiani was a very good director.  But I was madly in love [and John was in Madrid], so I would get in a cab after shooting on a Saturday night – the drive was 8 hours to Madrid – and then I would come back the next day for shooting.  I wouldn’t do anything like that nowadays!”

MB:  “I loved Klaus.  Klaus was really crazy.  He had his wife [Ruth Brigitte Tocki] and daughter [Nastassja] with him for some of the time.  And luckily he had a wife and I was madly in love because otherwise I really would have!”

“We were all supposed to get this per diem and we hadn’t been paid for ages.  One day we were doing this scene where we had to fly right into the village, in front of the camera.  Klaus was standing on top of this water tank and he did the scene but then he shouted down, “I’m not doing another shot until you pay me now!”  And I said, “Right on, me too!”  He shouted, “I’m not coming down until you pay me!”  He was shouting like a wild man in his monk’s robes.  And I was shouting, “And I’m not doing it either!”  And he just would not come down.  That did it for me; I fell in love.”

“All the cast and crew, we all spoke different languages – Italian, German, French, Swedish… Lou Castel spoke pretty good English but most of the crew and the director did not speak English.  So they had this translator and he had to translate what Klaus was shouting!  But it worked, and they didn’t do it again.”

There was another incident though:

MB:  “They used a lot of gypsies [as extras] on the train.  I loved them – they taught me how to do the clapping, and the dancing and singing.  But they weren’t feeding them, and when we found out we were all angry; particularly Klaus who was furious.  So he pulled another one!  Everybody was furious and it shamed them into getting food for the gypsies.”

MB:  “I had to lock my door at the hotel; there were people knocking all night:  “Martine!  Martine!”  But they realised I was in love and eventually they left me alone.”

DDS:  Are there any roles or films you wished you could have done?

MB:  “I really wanted a series – but that didn’t happen.  I liked doing both films and TV, although you get better budgets for films.  I liked the instant family you get on the film set; you’re part of a hub in an instant.”

“Here’s a perfect example:  I was in The Six Million Dollar Man [Outrage in Balinderry episode, 1975] playing Lee Majors’ love interest – an Irish agent – and it’s first thing in the morning: 6.30 arrived…8.00 on set, we have a love scene and we’ve never met before.  I’m in love at 8am – first thing – and we’ve only just met!”

“And then with the Bond films, I was comfortable with Sean Connery because we’d already met before the film to have our photos taken.  I’m sitting on his lap, in a bikini, but it’s nothing to do with sex; we’re just having a chat!” DDS:  What were your favorite projects?

MB:  “Each one has its own special place in my heart.  I enjoyed Thunderball [Dir Terence Young, 1965] because we all got on; Claudine [Auger] was a great friend, but I’ve not seen her for a while; Luciana [Paluzzi] is still a great friend.  The place was beautiful; the parties; the hanging out; Terence Young was great.  It was an amazing time.”

“I had great fun on Prehistoric Women [aka Slave Girls, 1967] with Michael Carreras – we just laughed so much!”

[Martine told me that one review of Prehistoric Women said it contained “the best bitch kitty acting” – I think I need to see it now!]

Martine had loved Jean Rhys’ novel, on which the film was based.  Michael Apted was originally going to do the film, with Michael York starring, but it didn’t work out and it was several years later in New York that Martine heard that a friend was going to be producing the film.  By this stage Martine was too old to play the lead but instead she got the role of Aunt Cora.

DDS:  Did it turn out well?

MB:  “It was interesting, but unfortunately the film did not turn out as it could have.”

Martine has given up acting these days and now enjoys a relaxing life, attending film conventions and events from time to time.  I asked Martine if she enjoys looking around at these events but she said that she doesn’t tend to get that much time to look around, although it is interesting to see all the posters and photos that people have of the films she was in; especially the ones from other countries that she has not seen before.

DDS:  Do you enjoy appearing at the events though?

MB:  “I go to these shows and have a lovely life – it’s delicious.  I’m not wealthy, but I’m rich in many other ways.  It’s nice to meet people; generally they’re sweet and they honour you and love you.”

If you want to meet Martine Beswick at one of these shows, she will be attending various events throughout the year along with her friend and fellow Bond Girl Caroline Munro (most importantly Caroline was in Luigi Cozzi’s brilliant Starcrash!).  Their next event is the SF Ball in Bournemouth, from 10-12 February 2012 – for details of how to book tickets see http://www.sfball.com/ 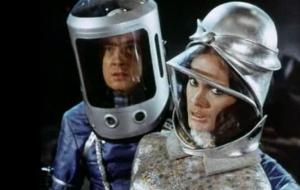