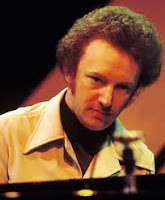 Roy Frederick Budd was born on March 14, 1947 in Croydon, Surrey, England. He was a cousin of drummer Trevor Tomkins [1941- ] and formed his first band, The Blue Devils, with his brother, Peter [1940- ], and brother's friend, Geoffrey Fraser. Budd sang Jerry Lee Lewis songs with this band at the Sutton Granada, Sutton, Surrey. Roy began leading his own trio at age 17, with residencies at the Lilliput Hall, Bermondsey, South-east London, the Hooter Club, Croydon, Surrey and the Bull's Head, Barnes, South-west London. The first line-up of the Roy Budd Trio featured Roy at the piano, Peter McGirk on bass and Trevor Tomkins drums. Then Budd left school and went solo, before reforming the trio with Jeff Clyne [1937-2009] on bass and Chris Karan [1939-  ]. Clyne was later replaced by Pete Morgan. Budd composed his first film score in 1970 and became a prolific composer of films during the seventies and eighties writing the scores for over fifty films. “Get Carter” (1971) and “The Wild Geese” (1978) are among some of his best known scores along with his only Euro-western “Catlow” (1971). Roy was married to actress singer Caterina Valente [1931- ] from 1972-1979. He continued to play with The Roy Budd trio and compose film scores until his death on August 7, 1993, of a brain tumor. Today we remember a life cut short on what would have been Roy Budd’s 65th birthday.
Posted by Tom B. at 6:02 AM