I’ve appeared in over 80 films and TV appearances among which was one Euro-western.
My stage name is taken from the sound a certain animal makes.
Guess who I am.

Chris Casey correctly identified this week's photo as that of Miou-Miou. 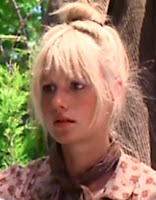