THE LONG DAY OF THE MASSACRE 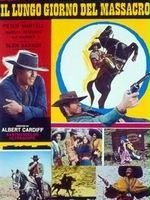 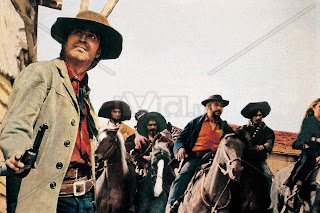 Joe Williams, former sheriff of Kansas City, is unjustly accused of the murder of two farmers which was actually done by the gang of the Mexican bandit ‘La Muerte’. In order to obtain a confession serving to clear him, Joe trails ‘La Muerte’, and when he finally locates him he is able to stop a bank robbery planned by the bandit. Unfortunately Joe is captured by ‘La Muerte’, but is saved by the arrival of the sheriff and his posse. After a fierce gun battle, during which Joe saves the life of the sheriff, the band of ‘La Muerte’ is eliminated. The sheriff realizes that Joe cannot have committed the double murder and cancels the arrest warrant, allowing him to get away and cross the nearby border.
Posted by Tom B. at 7:58 AM