A Long Ride to Eden 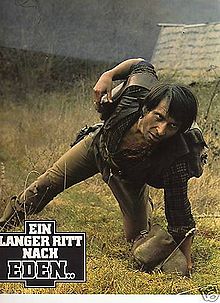 Two gringos arrive in a ghost town named Cripple, where they meet two Quaker couples from Pennsylvania. The Quakers live simply in a hut surviving on watered down soup and bread. Soon it turns out that the two gringos are bandits who are waiting for their fellow gangster. The two Quaker women awaken certain natural needs of the gangsters, especially Mrs. Stevens who is particularly liberal with her body, bathing naked in front of them. Otherwise the outlaws are not lead on by the women. While waiting for their friend they decide to terrorize the couples with violence and force the women to have sex with them.
Posted by Tom B. at 5:00 AM