Who Are Those Guys? - Eckhard Becker 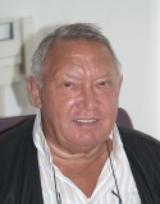 Eckhard Becker was born in Bad Schandau, Saxony, East Germany. Becker was, during the days of East Germany, for nearly 20 years a member of the Hans Otto Theatre and then the theater 89 in Potsdam, and occasionally appeared in numerous film and television productions. He devoted his attention to his stage representations in Ulrich Plenzdorfs “Wolves” and in “Wolokolomsker Road” by Heiner Müller and under his direction, “The Prussians are Coming”, which saw him give 205 performances. The last role he played was in the Royal Game. As a screen actor you could see Becker regularly until 1990 (“Jungfer, sie gefällt mir”, “Nelken in Aspik”, “Das Haus am Fluß”) following the reunification of the two German states, he appeared only two more times, including “All in All” (2007). Eckhard appeared in two Euro-westerns as a miner in “Apaches” (1973) and as a reporter in “Blood Brothers” (1975). Becker contracted cancer which he was battling when he died from a stroke on June 20, 2009 in Potsdam, Germany.
BECKER, Eckhard [5/11/1945, Bad Schandau, Saxony, East Germany - 6/20/2009, Potsdam, Brandenburg, Germany (stroke)] - stage actor.
Apaches - 1973 (miner)
Blood Brothers -1975 (reporter)
Posted by Tom B. at 5:59 AM