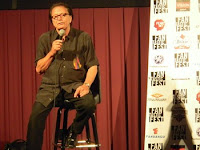 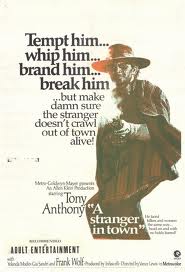 CM: As I recall, “A Stranger in Town” — like most of the other Spaghetti Westerns — often seemed very funny because it was so over the top. It took all the clichés of the genre — and pushed them up to 11.
TA: Well, let me tell you about one sequence — the one that I think led to the sale of this picture. I’m in a dungeon. They beat the hell out of me. Break me. Smash my face. Frank Wolff, a wonderful actor kicks me, leaves me there to die. They leave. And I’m there, crawling across the floor.
And in the middle of the shot — you see, over there, the director would talk to you in the middle of the scene, because they’d put the sound in afterwards. So the director tells me, “Tony! Go get your hat!” Well, by this point, I’m in the middle of the dungeon floor, and my hat is back there where they beat the hell out of me. And I’m thinking, “Go get my hat? Geez. Can you imagine what the audience is going to say? He’s stops in the middle of his escape, and goes back to get his hat.”
So I wouldn’t do it, I kept going. He starts yelling. I kept ignoring him. So he says, “Cut!” And he comes over to me with the Italian producer, and says, “Tony, you have to go over and get your hat. When I tell you to get your hat, you get your hat. Remember: You promised you’d trust me.” And I said, “I’m not going to stop in the middle of that and go back to get my hat. I’ll be laughed out of the theater for doing such a stupid thing.”
And he said, “You don’t understand. Every American cowboy — every cowboy in the world — has to have his hat.” I’m thinking, “Oh, my God! This guy is fucking crazy, I’m going down the tubes.”  But then the producer says, “Tony, you can’t see a cowboy who doesn’t have his hat. Where are we going to find his hat for the next sequence?”
So I figure, OK, if they’re going to argue, I’ll go back and get the hat — and then we can cut that out later. But Gigi fucked me on that. He knew exactly what I was thinking. So he did it all in one shot, and it couldn’t be cut.
CM: Flash forward about 14 years. By that time, “A Stranger in Town” had spawned three sequels.  When you did Comin’ At Ya! did you ever think of maybe playing the lead role as an older version of the same Stranger character? 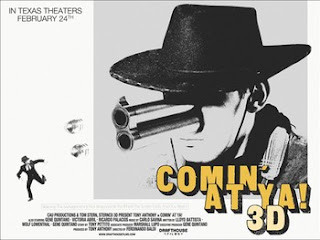 TA: Oh, no, “Comin’ At Ya!” was always intended as a completely different thing. The Spaghetti Western was already past its prime by that time. But I was offered this deal where I’d play a Western character in a movie with this Chinese actor who they thought was going to replace Bruce Lee, who’d died. And it was going to be shot in 3-D.
So I went over with [director] Ferdinando Baldi to Taiwan to talk with them, and to see what this 3-D thing was going to be all about. Because I’d never seen 3-D since I was in college, and we’d go to midnight shows. Well, we go there, and we see this incredible footage that they’d shot. And Baldi and I got to talking, and I said we had to do a Spaghetti Western with this technology, if we could find the equipment to do it the way we wanted to do it. And he said, “Absolutely. It’d be a goldmine.”
CM: “Comin’ At Ya!” actually was something of a hit back in 1981. But not as big a hit as you hoped, correct?
TA: Well, the really difficult part was the exhibition problem we had. This picture sold 3,250,000 admissions in less than 200 theaters. But there were really no other theaters set up for 3-D exhibition when “Comin’ At Ya!” came out. We broke the record for Star Wars at one theater where we did show it. And that’s why Hollywood tried to start making 3-D movies again in the ‘80s.
CM: I think it’s safe to say that “Comin’ at Ya!” is remembered more fondly by fans than, say, “Jaws 3-D” or “Spacehunter: Adventures in the Forbidden Zone” – or any of the other Hollywood 3-D movies from that era. Still, it’s been hard to actually see since its original theatrical release. It wasn’t until you were approached a few years back to have it digitally restored for theaters and home video… 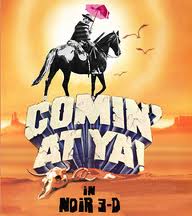 TA: The trouble was, I didn’t know anything about digital. Fortunately, [film restoration expert] Tom Stern, who’s now my partner, knows everything about digital. He came to me, and said, ‘Why don’t we just take a look at this picture, and see if it’ll hold up today?’
And I agreed with that, because I didn’t want to get embarrassed.  So we set up this screening. And we had a few people who came in and watched it, cold, without knowing what to expect. And we watched their reaction. And they liked it. A lot.
We wanted to make sure we had a picture that would still play today. And we decided that we did.

Link to complete article:  This is the link: http://houston.culturemap.com/newsdetail/02-24-12-spaghetti-western-icon-tony-anthony-is-icomin-at-yai-again/