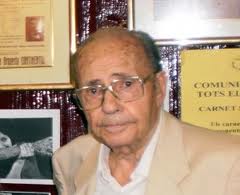 Madrid. Considered a cult film director for such films as “The Curse of the Beast”, “Omen”, “Naked Concern”, “Wild Goddess”, “Tarzan and the Mystery of the Jungle” and “Kilma, Queen of the Amazons”, Miguel Iglesias Bonns has died in Barcelona, Spain at age 96, reports the Academy of Cinema.
The Filmmaker is responsible for about forty productions in all genres, from fantasy to thriller through terror and the erotic, Born in Barcelona on June 6, ​​1915, he began making short films, and in 1942 directed his first feature, “His Excellency the Butler”.
The last time he was behind the camera was in 1988 with “Barcelona Connection”, starring Fernando Guillén, Claudia Gravy and Maribel Verdú, among others. His last appearance on the big screen was in 2010 with “The Man Who Saw Frankenstein Cry”, a documentary directed by Angel Agudo which recalled his work with Paul Naschy, and who directed some of his most outstanding films "The Curse of the Beast”, and “Savage Goddess”.
Iglesias was involved in one Euro-western co-writing the story and screenplay for Anthony Steffens “Tequila” (1972).
Posted by Tom B. at 2:36 PM