Who Are Those Guys? ~ Ramon Corroto 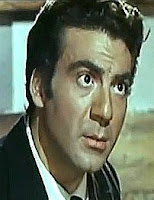 Ramón Corroto was born in Toledo, Spain on September 7, 1930. His first forays into acting were in the theater, where he began at the Spanish University Theater (TEU). He then became a member of several important theatrical companies, becoming for several years one of the best actors of Nuria Espert's. Among the works he performed in were “Los Boys de la Banda”, “La caula de las locas”, “La rosa tatuada”, the first work by Francisco Arrabal premiered in Spain, “Los Hombres del Triciclo”, “The Case of the Murdered Woman”, “Dollhouse”, the musical “Smiles and tears”.

Ramón Corroto was married to the actress Josefina de la Torre, sister of the writer and theater director María Guerrero, Claudio de la Torre from 1977 to 1980. Together with his wife and brother-in-law they founded their own comedy company for a few years.

On television, Televisión Española, he appeared for only a few years, since 1969, in a large number of dramatic programs and series. ‘Mr. Villanueva and His People: A Mother's Conquest’, 1979