Who Are Those Gals? ~ Adrienne Corri 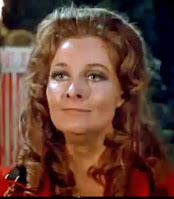 Adrienne Riccoboni was born in Edinburg, Scotland on November 13, 1930 to Italian immigrant parents. As Adrienne Corri she became a film, television, and theater actress best known for her work in Stanley Kubrick's "A Clockwork Orange." Corri attended the Royal Academy of Dramatic Arts and after graduating she landed a small role in the romantic comedy "Naughty Arlette." In 1951 she landed a breakout role in Jean Renoir's "The River," as a young girl who betrays her best friend by falling in love with a sophisticated English war veteran. She next appeared in an episode of the TV drama series "Robert Montgomery Presents" and in the low-budget horror film "Devil Girl From Mars." She worked steadily throughout the 1950s, with recurring roles on "Swords of Freedom" and "Armchair Theatre." Her work in the 1960s became much darker, and she appeared in many horror and suspense films such as "The Tell-Tale Heart" and "Bunny Lake is Missing" while continuing her work in stage productions around the globe. In 1965 she landed a role in the David Lean epic "Dr. Zhivago" and worked in low-profile TV series and films until landing a pivotal role in the controversial 1971 film adaptation of Anthony Burgess's novel "A Clockwork Orange." Her role as a gang-rape victim was both shocking and disturbing and encapsulated the film's depravity. She then appeared in recurring roles on the WWII-era drama series "A Family at War" and in the cult British sci-fi series "Doctor Who."