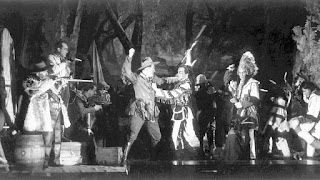 A Winnetou production in Berlin from 1929. In the middle: Hans Otto, later murdered by the Nazis, as Winnetou

When Apache chief Winnetou speaks these words to his blood brother Old Shatterhand, most people think of Pierre Brice and Lex Barker from the legendary 60s films.

What hardly anyone knows: Winnetou's career in front of an audience began as early as 1916! At that time he was not yet the proud chief of the Apaches, but only a supporting role in the operetta "Fräulein Rothaut" in Munich's Gärtnerplatz-Theater. 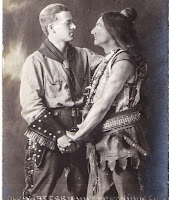 The reviews were divided: for some, Winnetou was “an old idiot prince”, others saw a loving satire on the Karl May romanticism.

The writer Karl May († 1912) invented the character Winnetou around 1875. The first photos of a Winnetou production date from 1919.

They show the legendary scene in which Winnetou and Old Shatterhand hold hands and are part of a performance at the Deutsches Theater in Munich.

When a Winnetou play was performed in Berlin ten years later, it sparked enthusiasm for the Indians across the country - there were suddenly Winnetou productions everywhere.

The fate of the actors in 1929 is dramatic: Hans Otto - a communist - played Winnetou. 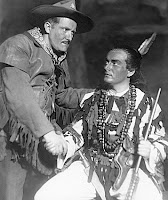 1929 in Berlin: Hans Otto as Winnetou and Ludwig Körner as Old Shatterhand. On stage they were blood brothers - in real life Otto was murdered as a communist by the Nazis in 1933, Ludwig made a career as a Nazi functionary

He was murdered by the Nazis in 1933 after an interrogation. The role of Old Shatterhand took over in 1929 Ludwig Körner - who later made a career as a Nazi functionary.

Because of blood brothers.