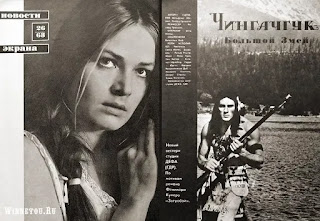 We present a rare copy of the Soviet magazine "Screen News" of the information and advertising bureau of the Lithuanian Republican office "Kinoprokat" with a review of the film "Chingachguk - Big Snake". The text and spelling of the original have been preserved in full. Notice that North America is named South. Another thing is important! The story about the film in the republican magazine is made more interesting than in the more "circulated" "Soviet Screen" or "Satellite of the Cinema Spectator". The magazine, by the way, was published both in Russian and in Lithuanian (“Ekrano naujiernos”) languages. In the captions to the photographs, there are the names of individual performers, which are not indicated in the on-screen credits of the film itself. There is even an excerpt from the director's interview of Richard Groschopp (full original source has not yet been found). Well, judge for yourself ... and the matographers of the

GDR present a film about the Indians to the audience. The unforgettable heroes of Fenimore Cooper from the Hawkeye series of adventures come to life on the screen; the film is based on the novel "St. John's Wort". Natty Bumppo - the hero of this cycle, known by various names (St. John's wort, Hawkeye, Pathfinder, Leather Stocking) - enters here on his first military path. 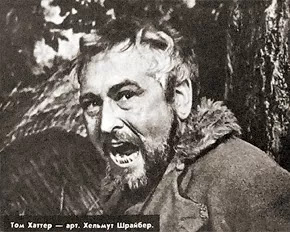 The filmmakers tried to portray Cooper's characters as faithfully as possible. They abandoned the false picturesqueness and ornamentation inherent in many American Indian paintings. Cooper set the novel off along a lake on the east coast of America, home to Indian tribes belonging to the same language group as the Hurons and Delaware in the film.

The director Richard Groschopp shot a colorful and entertaining film, without losing sight of the problems, moods and customs of South America.

... 40s of the XVIII century. The British colonialists seek to seize the lands of the Indians, provoking quarrels between the tribes.

Natty Bumppo, a white youth raised by the Delaware, an excellent hunter named St. John's Wort, arrives at the lake, which the Indians call the "Shining Mirror". He must meet here with the Great Serpent Mohican living with the Delaware, whose bride is in captivity with the Hurons. 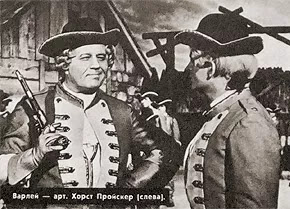 Big Serpent, trying to free his bride, falls into captivity. While the Mohican was being tortured at the pillar, a detachment of the British attacked the Huron camp. Few of the Indians managed to get away alive.

Only now the mortally wounded leader of the Hurons realized that the Big Serpent who called for the unity of all the tribes was right, in his last, dying instruction, he demands the restoration of peace between all Indian tribes ...

In the discussions that may arise after watching our film, the question of its fidelity to the literary source will certainly be raised. We tried - with a full sense of responsibility - to combine the ideas and knowledge of the writer with modern knowledge in this film. We hope that, despite some deviations, we have remained faithful to the ideas of the realist and humanist James Fenimore Cooper ... 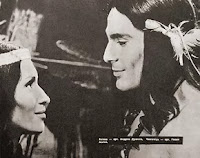 The main role was played by the Yugoslav actor Gojko Mitic. This is not his first roll in this regard. Last year, on our screens, a film of the joint production of the GDR and Yugoslavia "Sons of Great Bear" was shown, where Goiko Mitic played the role of the leader of the Toki Ito Indians. Excellent external data, excellent physical fitness help the actor to create an expressive reliable image.