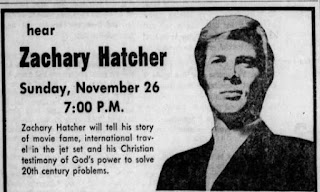 The lead actor in the 1966 Spaghetti western “Per mille dollari al giorno” aka Renegade Gunfighter was Zachary Hatcher has always been a mystery. Lately I found information through Newspapers.com. A couple of articles dated from the early 1970s popped up and I learned he was an American model and actor named Zachary Adams born on September 7, 1940. Apparently he was in Rome at the right time and was spotted and signed for the role of Hud Backer. The film is best known for the appearance of co-star Pier Angeli. In the 70s Hatcher was travelling on a speaking tour with an evangelist named Moody Adams and telling his story of coming to Christ after almost dying from an overdose of LSD and opium. Hatcher only made one other film “Camille 2000” and a third never made it to completion, called “Checkmate” when Hatcher was injured. He then travelled the country with Moody and sometimes singer Bob Gibbons.