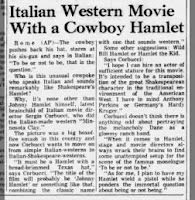 Rome (AP) – The cowboy pushes back his hat, stares at his six-gun and says in Italian: “To be or not to be, that is the question.”

Who is this unusual cowpoke who speaks Italian and sounds remarkably like Shakespear’s Hamlet?

Why it’s none other that Johnny Hamlet himself latest brainchild of Italian movie director Sergio Corbucci, who did the Italian made western “Minnesota Clay.”

The picture was a big boxoffice smash in this country and now Corbucci wants to move on from simple Italian-westerns to Italian-Shakespear-westerns.

“It must be a Hamlet with a broad-brimmed Texas hat.” Says Corbucci. “The title of the film will probably be “Johnny Hamlet” or something like that, combining the classic name with one that sounds western.”

Some other suggestions: Wild Bill Hamlet or Hamlet the Kid.

“I hope I can hire an actor of sufficient stature for this movie. It’s intended to be a transposition of the great Shakespearean character in the traditional environment of the American West. I have in mind Anthony Perkins or Germany’s Hardy Kruger.

Corbucci doesn’t think there is anything odd about portraying the melancholy Dane as a gloomy ranch hand.

“When it comes to Hamlet, stage and movie directors always wrack their brains to find some unattempted setup for the scene of the famous monologue ‘To b or not to be.’

“As for me. I play to have my Hamlet wield a pistol while he ponders the immortal question about being or not being.”