The Spanish coast along the Mediterranean Sea is dotted with towers and castles and other buildings that were constructed at various times during the history of the country and were used for various purposes. Many were used to defend the country from the dangers that came from the sea. Many have been restored and are available for visitation for historical and cultural knowledge. 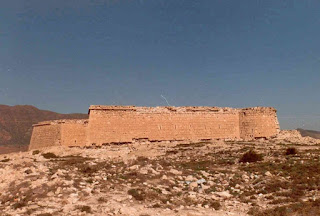 San Felipe Castle or San Felipe's Battery is located on a mountain in the tip of Sparto in Los Escullos and was built on a fossil dune. The castle, given its coastal battery typology, is on the edge of the sea and sets back about ten meters. It was designed in 1735 by Philip Crame during the reign of Charles III, when the 1874 regulation ordered the construction of a four-barrel battery in the paraje de Los Escullos, the work being done according to the project signed in 1765 by José Crame, which combined in his plan a barbette artillery in his maritime facade, with common stays, chapel and barracks, arranged around a patio and a hornabeque with barbecue and moat. The battery consists of a series of stays destined for a troop hostel, storage for supplies and ammunition, industrial blocks and religious trades. Access to the building was made through a drawbridge leaning on a pit. Although the original design contemplated the hostel of a staff composed of gunners, an infantry detachment and a cavalry, it would eventually lack the latter, so it was composed of an officer, three cabos and 20 infantry soldiers, considering it enough this endowment for defense. It is located on a rocky formation of calcareous nature that forms a cliff over the sea about eight meters high. However, fortification would be erected from 1764 under the Regulations for Defending the Coast of the Kingdom of Granada. The castle, although built in the second half of the 18th century, it is integrated into a rather older coastal defensive system, and it grew and was modified according to needs and changes in war techniques advised by the French in the War of Independence, there are others similar construction on the Almerian Coast and Grenadine, Garrucha, Old Guards etc.

Los Scullos is a neighborhood belonging to the municipal term of Níjar, located inside the Natural Park of Cabo de Gata. (The name of Los Escullos derives from a popular adaptation of the word ′′stumbling block", a word derived from rgw Latin ′′Scopulus′′ which according to the SAR would have three meanings: ′′Peñasco that is in water flower and is not discovered well",′′ danger, risk′′ and one last as ′′difficulty, obstacle′′) Text definition on Blog Antonio J. Asensio

He was declared Well of Cultural Interest by the Resolution of June 22, 1993.. Under the protection of the generic Declaration of the Decree of April 22, and Law 16/1985 on the Spanish Historical Heritage. In 1993, the Junta de Andalucía granted special recognition to the castles of the Autonomous Community of Andalusia. 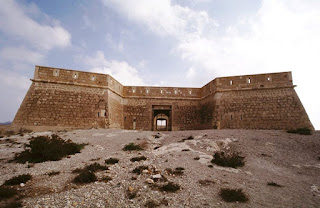 This fortress was seen and used as an exterior for a prison in the “Death Rides a Horse” (1967) starring Lee Van Cleef and John Phillip Law.