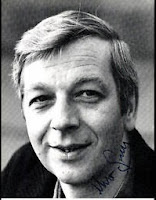 German actor and voice dubber Norbert Gescher died on April 30, 2021. He was 81. Born in Berlin, German on December 14, 1939 as Norbert Gescher-Ringelnatz, he was is a German voice actor. Gescher was well known for being the German voiceover of Steve Martin, Richard Dreyfuss, and Beau Bridges. Gescher is the son of German translator Muschelkalk Ringelnatz, who was also the widow of German author, painter and cabaret artist Joachim Ringelnatz. Gescher managed his legacy until his recent passing and was responsible for exhibitions. His voice was heard in three Euro-westerns: “His Name was Holy Ghost” (1972) [German voice of a soldier]; “Lucky Luke” (TV 1984) [German voice of Augustus Oyster] and in Bandidas (2006) [German voice of Jose Maria Negri]
Posted by Tom B. at 3:23 PM