We continue our search for filming locations of “A Bullet for the General. The tally for the guns Chuncho has brought in comes to 5,000 pesos. Chuncho goes to se General Elias to be paid. Elias asks the accountant the amount and is told 5,000 pesos. Elias asks Chuncho about the massacre at San Miguel because they had no arms to defend themselves. He asks Chuncho what type of man could do such a thing and he answers a coward. Elias asks him what he should do to such a man and Chuncho says, kill him. El Santo tells Elias he must carry out the punishment. Chuncho agree. Chuncho returns the money for the guns and tells Elias to take care of his machine gun. Chunch and El Santo then leave. 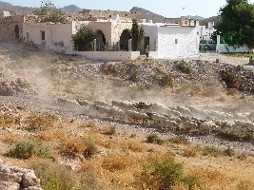