Return Of The Magnificent Seven Kicked Off Hollywood's Sequel Obsession 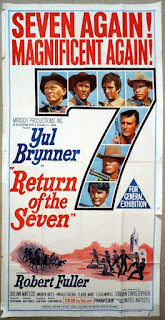 money to be made in familiar franchises

Return Of The Magnificent Seven might have kicked off Hollywood's modern-day sequel addiction. The original Magnificent Seven is based on Akira Kurosawa's classic Seven Samurai where a ragtag team of samurai is assembled to defend a village from a bandit attack. Kurosawa's work, in general, would be highly influential on other filmmakers, with The Hidden Fortress providing George Lucas with the basis for Star Wars, and Yojimbo was reworked into Clint Eastwood's Fistful Of Dollars.

The Magnificent Seven from 1960 reimaged the concept as a Western and brought together a cast that included Yul Brynner, James Coburn, Steve McQueen, and Charles Bronson. The movie is now considered an iconic Western, and would itself be reworked into the Roger Corman produced sci-fi movie Battle Beyond The Stars. The Magnificent Seven later became a TV series starring Michael Biehn and Ron Perlman (Hellboy) that lasted for two seasons, and it was remade in 2016 with Denzel Washington.

quels used to be considered something of a dirty word in Hollywood, with neither stars nor directors keen on returning to familiar characters. The Universal Classic Monsters series made multiple sequels featuring characters like Dracula or the Wolf Man, but overall, follow-ups used to be rare. The Magnificent Seven was one of the first big movies to spawn a sequel with Return Of The Seven, AKA Return Of The Magnificent Seven. It came six years after the original and given the massacre that occurred at the end, unsurprisingly its a mostly new cast. 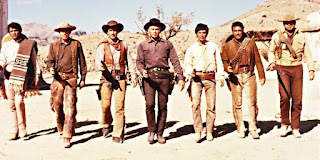 Yul Brynner's Chris is the only returning actor, while Steve McQueen turned down a chance to return and was replaced by Robert Fuller. Return Of The Seven essentially repeats the plot of the original, with Chris being called upon again to unite a team of gunfighters to save a Mexican village. Sadly, the sequel is a great deal lazier and goes through the motions with a minimum of flair. Warren Oates (The Wild Bunch) stands out as one of the gang, but otherwise, it's a disappointing effort.

It still turned a tidy profit, which soon led to 1969's Guns Of The Magnificent Seven. That film's executive producer Walter Mirisch felt there some safety in returning to a familiar premise, which was perhaps influenced by the success of the James Bond series. Yul Brynner opted out of returning and was replaced with George Kennedy, a great actor who looks absolutely nothing like his predecessor - right down to a luxurious head of hair. The third film is a decent but forgettable entry, and the original franchise came to a close with 1972's The Magnificent Seven Ride, with Lee Van Cleef turning over as Chris. The declining grosses likely lead to no further sequels being made.

The Magnificent Seven is one of the only major Hollywood movies to receive a sequel in the 1960s, which gradually became more of a thing in the 1970s and 80s. The Planets Of The Apes sequels were made with decreasing budgets and would only gross around half of the original, but they made enough profit to justify making them. The massive success of Jaws 2 and The Empire Strikes Back would convince big studios of the wisdom of movie franchises, and nowadays most of their output revolves around sequels like Avengers: Endgame or Deadpool 2.

The Return Of The Magnificent Seven is ultimately a mediocre follow-up to a stone-cold classic, but its success helped prove to studios there was money in a familiar brand - an idea that certainly latched onto.