The American Club of Rome

The city of Rome lost a little of its light last week. On April 13th, 2021, the dynamic Harold Bradley Jr. passed away at Salvador Mundi Hospital at the age of 91. A man with worlds to conquer and rich life well lived, he is survived by his 3 children, 3 grandchildren, and his ever-adoring community of musicians, artists, athletes, and friends. 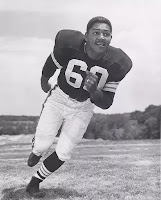 Harold in his Cleveland Browns uniform 1954

A true Renaissance man, his success with the legendary “Orange Bowl Five” and his time as 2-time Super Bowl champion in the NFL did not define him. While many would be content for a lifetime with such accolades, he continued breaking through barriers with an unrivaled lust for life. His talents took many forms as a painter, musician, art historian, educator, film and theater actor, and constant patron of African-American music, culture, and values.

Originally from Chicago, he moved to Italy in 1959 and immediately fell in love with Rome. He met his bride Hannelore (a German Holocaust survivor) and had his 3 lovely children Michaela, Lea, and Oliver in the Eternal City. He founded the cultural hub Folkstudio in 1961, with art exhibitions in the day which morphed into a jazz club by night, frequented by all sorts of locals and celebrities, like Bob Dylan and Ravi Shankar. He starred in over a dozen Italian films, even making multiple appearances in the epic film Cleopatra with Elizabeth Taylor.

The American Club of Rome honored him with the Lifetime Achievement Award in 2005 at the Hotel Majestic, demonstrating his core as a strong and generous citizen, the type of man who makes you proud to be an American. He received the Music for Peace prize in 2017 as an avid anti-war activist. He put in constant work to advance the arts, as well as the American, and African-American communities in Italy.

There’s not much that can’t be said about this dynamic individual. Whole essays could be written on him and they would merely scratch the surface. After accepting his Lifetime Award with AICR, the then 76-year-old man told his close friend Chris Ballard, “I’d like to have another 50 years on earth to prove some more victories and triumphs in the arts.” The AICR was very important to Harold and he gave us all so much to strive for, a goal for which to aim. Those who had the privilege of meeting him had the opportunity to be in the presence of a lion, of an icon. 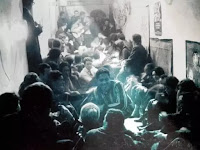 We will miss him dearly.