Voices of the Spaghetti Western ~ “The Man of the Cursed Valley” 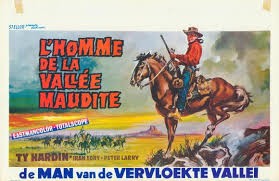 Today we’ll cover “The Man of the Cursed Valley”

Fiorella Betti was born Petti Delia in Rome, Italy on April 18, 1927, she was an actress and voice dubber who appeared in films after World War II from 1949-1978. It was as a film actress though that she first learned her trade. She debuted aged thirteen in a supporting role in “Captain Fracassa” (1940) and soon graduated to more important and challenging roles such as in “Il campione” (1943). Her last interesting role in front of the camera in “Lost in the Dark” (1947) as a young girl brutalized by a crook and loved by a blind violinist played by the great Vittorio De Sica. Betti failed to transition to adult roles and decided to lend her beautiful voice to foreign actresses in the Italian post-synchronized version of American, British and French films. She was the official Italian voice of Elizabeth Taylor in the fifties as well as Jean Simmons, Grace Kelly and Natalie Wood. She died in Rome on November 2, 2001.