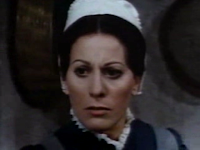 According to Il Mondo dei Doppiatori film, TV and voice actress Franca De Stratis died in Rome, Italy on March 9, 2021. She was 81. Born Francesca De Stratis on April 23, 1939 in Italy. She began her career as an actress in theater, radio, television and in films. However, she was not particularly active in any of these professions, usually playing minor roles. From the mid-seventies she devoted herself almost exclusively to dubbing, and is remembered mainly for having given the voice to Lindsay Wagner on the TV series ‘The Bionic Woman’ and of the main series from which this spin-off was based, ‘The Six Million Dollar Man’. She retired from acting in the early 1990s and appeared in the theatrical play “In the Hour of the Lynx” directed by Claudio Frosi and occasionally as a director of dubbing. Frana appeared in one Euro-western as Carmen Morales in “The Price of Death” (1971).