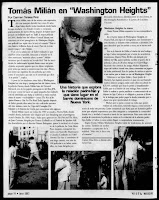 Tomas Milian, one of the most respected actors in European cinema, decided about 20 years ago to leave Italy, where he had been succeeding for a long time, to move to the United States and start, practically, again. Now, after having played a brilliant role in Traffic, the best movie of 2001, where he played the villain General Salazar, he touches us in the leading role in Washington Heights, a movie that he says touched his heart, "This is a beautiful story, full of love. For me, it's really magical,” says Milian.

And already with the satisfaction of having done what many believed impossible, stand out and succeed in American cinema, "having years and an accent", Milian recognizes that the journey has not been easy, "I have sacrificed, I have been reading lines like a beginner, accepting roles that made me ashamed, but I had to make myself known, once again ... Now, I feel so proud of this movie, that I am like the boy who appears in the commercial that says: 'yes, you can'",

Despite the troubles, between Italy and Washington Heights there is a long and prestigious list of hits, such as the movie Havana, where Milian played General Menocal, one of the leading roles in the film: JFK, in which despite being a small role, it was performed with such intensity that he even got sick; and there are many plays - unavailable - like Kiss of the Spider Woman and One for the Road. All, achieved after having won, years before, the most coveted awards in Italian cinema, such as La Copa del Consiglio Dei Ministri and the Antonio de Curtis, to name just a few.

Tomas Milian was born in Cuba. In 1957 he moved to New York, where he studied drama, having been accepted by Lee Strasberg for the prestigious Actors Studio. In 1959, he traveled to Italy to appear in Jean Cocteau's The Poet and the Muse, directed by Franco Zefferelli at the Spoleto Festival. There he was discovered by the director Mauro Bolognini, who included him in the cast of the film La Notte Brava. Soon after, he shared honors with Marcello Mastroianni and Claudia Cardinale in Il Bell Antonio. That was the beginning of a long career, with more than 100 films to his credit, among them, La Luna, directed by Bernardo Bertolucci, Identificazionne de una Donna, by Michelangelo Antonini; and Il Lavoro, by Luchino Visconti

In the Latin Quarter of Washington Heaights, in New York, two sons of immigrants, one Dominican and the other Irish, are torn between ambition and identity. Only to find out that dreams sometimes don't come true.

This is the story of Eddie, the owner of a winery, and his son Carlos played by the actor of Dominican descent, Manny Perez. The film is directed by Alfredo de Villa, who also wrote the script. In the film, 28-year-old Carlos works in the East Village making comic strips. His friend Mickey Kilpatrick, is the super in the building where he lives, wants to become a professional bowler. But their parents are opposed to their dreams, which are based on leaving Washington Heights.

Unlike their children, Eddie and Sean (Mickey's father), they have managed to put themselves at peace with their frustrated dreams. Close friends, there is between them a debt of $25,000, an amount that Sean loaned to the profligate Eddie. He was assaulted and was paralyzed as a result of a gunshot. His son Carlos is forced to take over the warehouse in order to pay the debt, having to turn down a great job opportunity.

Mickey, for his part, commits a robbery in order to carry out this entire process, Carlos understands that even to be a graphic illustrator he has to acquire experience, that he must integrate and understand the community where he lives and reveal it to the world through his experiences. But among all this skein of emotions, the film focuses on the evolution of the father-son relationship, Eddie and Carlos, and how they both come to understand each other. According to Tomas Milian, Washington Heights speaks of traditions, of friendship, of affection. Also of frustrated dreams and acceptance of reality, "Furthermore, I did it with my heart." 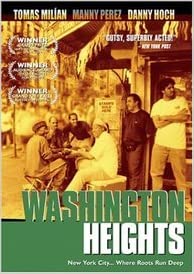