We Are 18 Years Old – English title 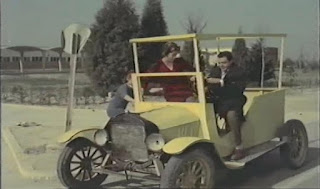 Encouraged by their cousin, two teenagers embark on a journey in which they hope to experience all kinds of adventures. Failing to do so, they choose to imagine them and end up believing that they have been kidnapped and locked in a sinister castle.

Franco’s first feature film and certainly a very curious, unclassifiable film that mixes various genres, always under a "familiar" layer, not in vain it is a film "for all audiences". And that there are two stories, more for adults than for children, even with murders and blood, as well as the story of the escaped criminal, who thanks to an excellent monologue by the actor who plays him: Luis Peña, reaches sensitive, emotional levels and quite sad. Not in vain does he talk about what it means to him to be free, to feel that he is a normal person whom people would see, if so, on the street and say "Good morning" ... It is true that it is somewhat irregular, but at all times it is funny, not despondent, but full of fine irony, sought-after naivety and mountains of imagination, both in form and in substance.

It is a very well-directed and interpreted film, with an excellent photograph in beautiful color by Eloy Mella, and his sympathy (that of the movie I say) becomes overflowing ... if you enter it, not in vain It is true that she is a great Martian, crazy at times, a trademark of Jesús Franco, but I honestly think that she is very enjoyable. I have had a great time although it is true that his first third, with Antonio Ozores as the great protagonist, can make you think that it will be a burden because his character does not stop talking. But if you listen to him, we will hear pearls, bullshit for some, frankly ingenious and disgusting. I really had a good time watching her, really. And I think for this reason that it is a film that must be vindicated.