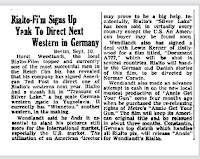 Horst Wendlandt, the local Rialto-Film topper and currently one of the most successful men in the Reich film biz has signed American Ted Post to direct one of Rialto’s westerns next year. Rialto had a smash hit in “Treasure of Silver Lake,” a big scale German western made in Yugoslavia. It currently has “Winnetou,” another western in the making.

Wendlandt said he finds it essential to slant his pictures still more for international market, especially the U.S. market. The utilization of an American director may prove to be a big help. Incidentally, Rialto’s “Silver Lake” has been sold in virtually every country except the U.S. An American Buyer may be fund soon.

Wendlandt also has signed a deal with Lex Barker of Hollywood for a film titled “Document A777,” which will be shot in several countries. Rialto will handle the German and Danish stories of this film, to be directed by Norman Corwin.

Wendlandt also made an advance attempt to cash in on the new local musical production of “Annie Get Your Gun” some four months ago when he purchased the re-releasing rights of Metro’s “Annie Get Your Gun,” The film will keep its American original title and be reissued in about three months. Constantin, German top distrib which handles al Rialto pix, will release “Annie” for Wendlandt’s Rialto.

Rialto that summer had Apache Gold before cameras, and Last of the Renegades ready to go, but unbeknown to them Barker & Brice were being courted by CCC topper Artur Brauner to star in his rival Winnetou film, Shatterhand aka Apache's Last Battle, that was to start in the late fall-early winter. Brauner was of course successful in signing Lex Barker, Pierre Brice & Rolf Wolter for his Winnetou film which must have outraged Railto honcho Horst Wendlandt, who soon as he could, made Barker & his sidekick Wolter pay for their treachery by sidelining the pair for the next three Winnetou movies (Frontier Hellcat, Rampage at Apache Wells & Frontier Frontier). Brice of course couldn't be punished; he was the one and only Winnetou.

Director Ted Post never did get to do a western for Rialto and would have to await five until his breakthrough film Hang Em' High (1968).