We continue our search for filming locations of “A Bullet for the General”. The scene shifts to the open countryside where the caravan of Chuncho’s men are on their way to the mountain camp of General Elias. When Picaro spots Chuncho he tries to ambush him but Chuncho out smarts him and kills him. He tells Nino they will take the guns to another buyer. 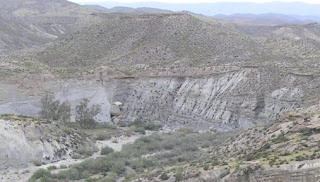 This scene was filmed in the Tabernas area.