For decades, doctors have been warning that smoking cigarettes is death. Now, Death is a cigarette.

Death cigarettes, in packages adorned with the skull and crossbones symbol, are making their way into retail outlets across the country, where they appear alongside conventional cigarettes. The product, which is generally priced about the same as Marlboro or Winston cigarettes, come in one flavor (regular), one length (85 millimeter) and one color (black naturally).

“The idea is to put out the truth about cigarettes,” Charles Southwood, head of Death Tobacco, said in a telephone interview from Venice. “People have the right to smoke cigarettes, but they should be alerted to what they’re doing.”

Southwood, who described himself as an occasional smoker and entrepreneur who has “done a lot of things, from making movies to mining,” has been a merchant od Death since early in 1991. Initially distributed in the Los Angeles area, the brand is becoming available in New England, along the East Coast, in Florida and in Western states. Southwood provided sales figures, saying distribution was only becoming more widespread now.

Death is also being sold in Britain, where an advertising campaign by the Hoare Wilkins agency in London has featured X-rays of a cancerous lung next to a headline “The shadow of death.”

In this country, Southwood said, there is no advertising budget as such; efforts have been limited to bus benches in West Los Angeles bearing the slogan “Don’t smoke Death cigarettes.”

That coy approach typifies Death’e entire pitch. On one hand, the product chillingly invokes the perils of its use. On the other hand, it seems to celebrate its badness.

Scott Ballin, a vice president of the American Heart Association in Washington, said: “We’re schizophrenic on this. It makes a little too much light of the serious issues involved with smoking. We can’t see too much humor in this because cigarettes continue to be the leading cause of death and disease in America.

“But Death does a service in making fun of the tobacco industry’s advertising and marketing of a deadly product,” Ballin said. 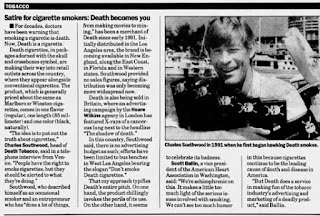