Argo was founded in 1929 in Cavaria, a small town near the city of Gallarate in the province of Varese. From the very beginning, Argo highlighted the vocation to develop innovative products and the whole period that, from the birth of the company through the Second World War and again after the war, characterizes the Argo brand in the sector of domestic heating products.

In addition to products, communication has always been one of Argo's priorities; for that time, commercials in the cinema were a privileged means of addressing new couples and young families. The commercial of the Brunetta stove tells of the daily discomfort in having to load the stove with coal, clean it of ashes, it was very hot when you near close and very cold when not far away ... but with the new high-performance Argo stoves, now had cleaning without opening the door and convection heating, the problems were definitively solved.

With the advent of television, Argo launched the two characters Bill and Bull who became famous in Rai Commercials, who kept both adults and children entertained and informed.

Argo window air conditioners, the first air conditioners that were seen in shops and offices, sometimes were fixed to walls and other times "wheeled" to be able to move them from one room to another ... anticipation of current portable air conditioners

In the 60s, color TV had arrived in Italy and Argo launched its legendary window air conditioner called "il Ferma Caldo" on the market, available with different aesthetic finishes, for fixed and portable installation. 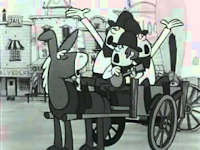